It’s a common issue that final stage failed when adding key for Renault Megane IV/Kadjar 2015+ with Autel MaxiIM IM608.
Here comes an example on Megane IV 2017.
After read flash data etc, pre-coded key then go to program by holding on stop start button and no dice. Tried 3 different cards and 3 different machines, same issue, should have realised what the problem was. 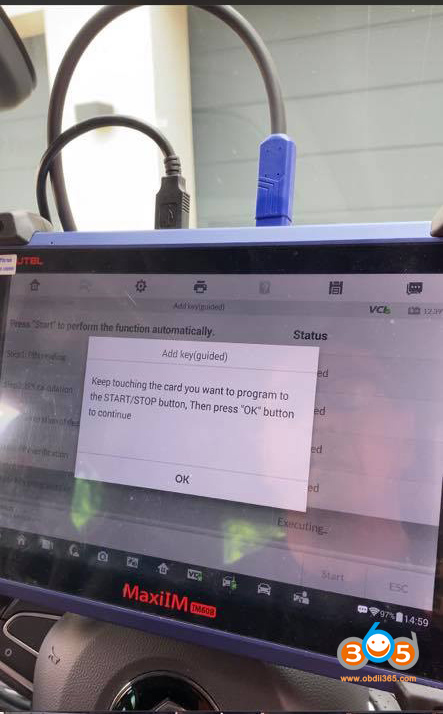 Took the battery out of working key and tried emergency start and wouldn’t work, spoke to Techs and apparently it’s a common issue, coil behind the button fails.
Be very careful when doing add key on Kadjar and check that you can use emergency start before reading flash data, as unlike the Megane the Kadjar wipes the keys when you read the data and you start from fresh whereas if the process fails on the megane the original key still works!
Sometimes, when you read the flash data it can Wipe the VIN from the UCH leaving the data you’re reading incomplete, so when it comes to calculate password it fails and you’re left with 0 keys in the system, luckily it was for renault dealer and Master tech plugged in and re wrote VIN to UCH and all was well, at that time there was no option for this on im608 but since recent update it has appeared, I’ve done about 10+ since then and had no issues so cannot confirm wether it works or not but can’t see why it wouldn’t. You’d just restart the whole process and re-read the flash data.
But other than that it’s all pretty straight forward, takes about 15 minutes all in.
Hope this is of use to someone

The same problem was on a Renault Magan mk4 2019.  But it is solved. All out key programmers need to be updated! The solution was so simple in the end. In Renault keyless you don’t now hold the remote on the stop/start button for 10 seconds. They have moved the sensor to just under the air vent near the globe box. Look for a tiny wifi symbol and hold remote there. It appears that Renault have moved the key programming position, instead of holding the key on the stop/start button now you hold it 12 inches to the left. (look for a wifi symbol on dash near glove) and done.Once discovered all was done in 5 minutes.