I’m back in my BMW Z4 before I’m trying to figure out some issues I’m having with a the way the engine starts, it starts fairly rough after its been sitting for a while and sometimes it doesn’t even start at all until second or even third try, I feel it looks like if it’s been sitting for probably 12 hours.

So as you saw there a though, actually this one wasn’t that bad but it’s still a struggle. 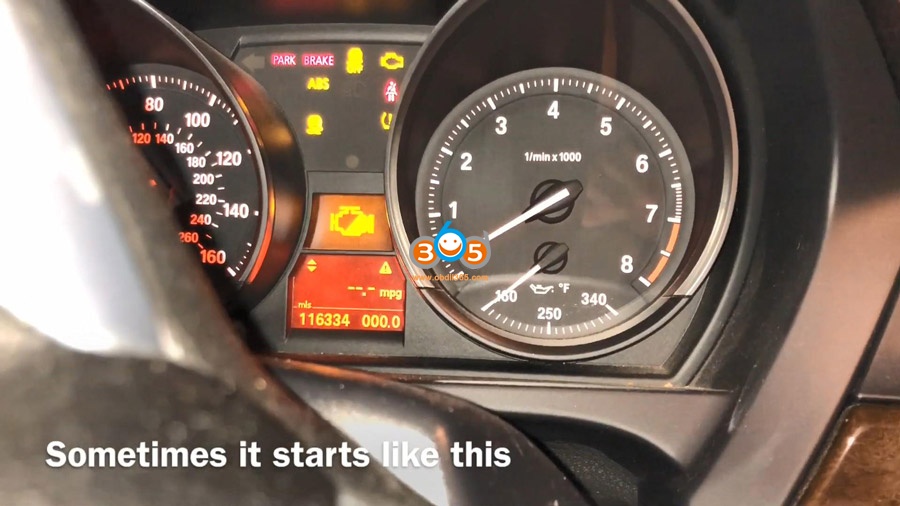 Yeah. In order to solve this issue, I’m going to calibrate or do compensation adjustment on the injectors, let’s see how that works.

In order to adjust the injector compensation rate, we must know the values of each individual injector, this was the old engine I took out, kind of it’s easier to show where these values are located, so normally you’d have a cover and engine, some installation and wiring running through here, this one’s missing some of this stuff, so it will be easier to see, but as you probably know these are the injectors there’s four of them. And to get those values, you’d have to look right in there. See if I can’t air this, so injector value from the left to right one: 243 -> 261->230 ->265 and then (hard to get that one in camera, but I’m sure with a light you can probably see it) . So now what I’m gonna have to do is go to the actual car and check the values that I’m going to have to program and since the computer from the car. Basically programmed for this engine and now for the new one that I have in the car now. 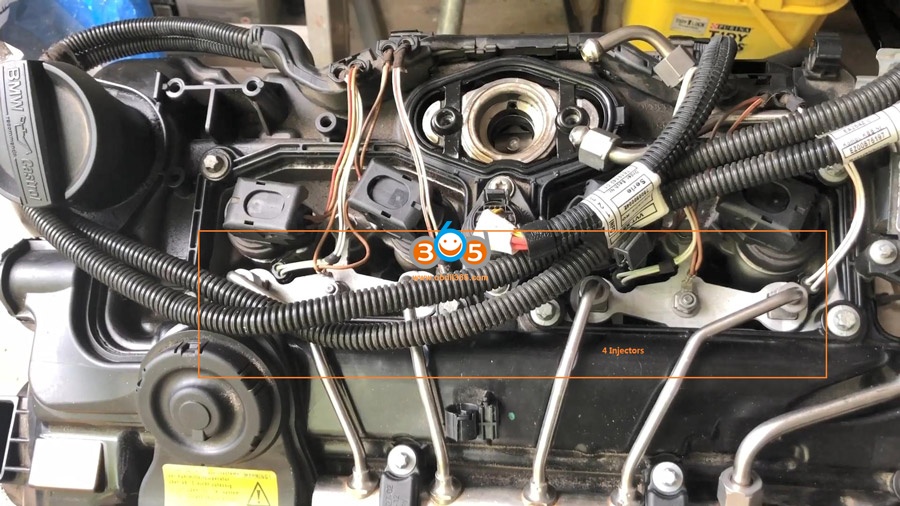 So if you’re swapping the engine of course they did not want to spend a few thousand dollars on the computer, so the computer is going to be under here and there’s some in there. Let’s see if we can get to the numbers then program them. 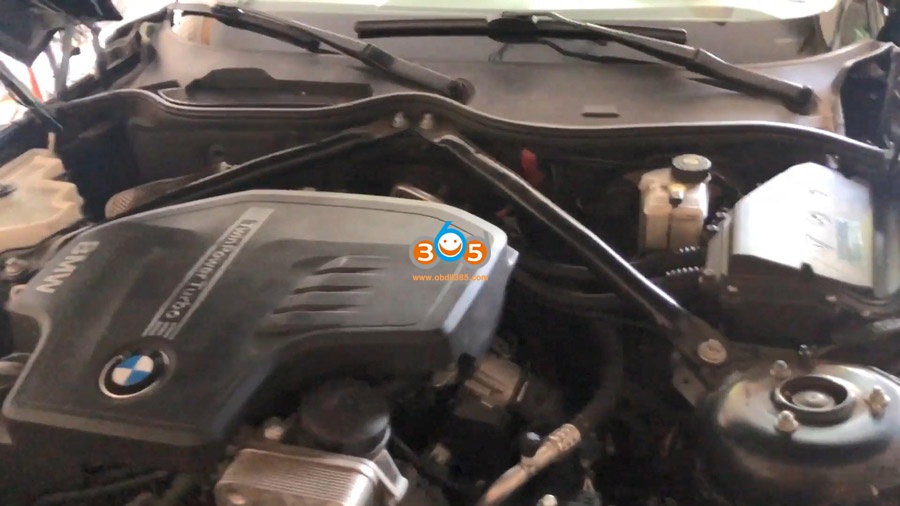 I have now recorded the old values from the old engine and in the same order, I’m gonna take note of the values from this engine, now we’re going to program them. 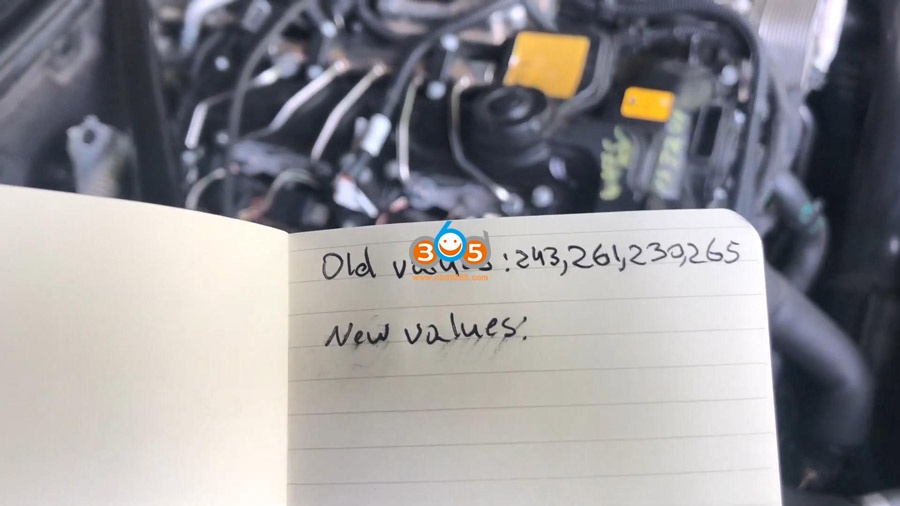 A little bit more difficult to see on this one since it’s in a different angle but I’m gonna try to use the camera to shine some light on it here’s the first injector it’s 215.

This is the second one also looks like a 215.

And the 4th one it’s 215 as well so I guess they put in all the same injectors in which makes sense.

And that does make me wonder how come these were so different from each other, that’s a huge difference and I guess that’s why you need to compensate between, you know when you switch to new injectors.

Normally to do something like programming injectors would require very expensive tool usually stared from 450 dollars.

But a friend of mine recommended this Autel AP200 complete diagnostics tool. Which should allow us to actually provide new values for the injectors and adjust the compensation rate, just cost 60usd. After receiving it, you download an APP.

And then a specific diagnosis software for your vehicle. I will show you exactly how it’s done. 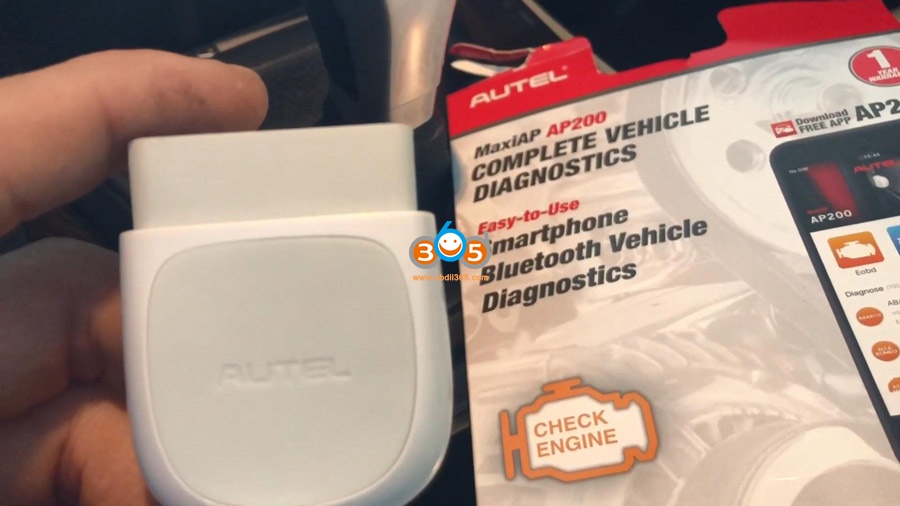 Let’s see how long it’s gonna take and if it actually works I really do hope so because a local shop told me over 200 dollars just do this which so far it’s taken me 10 minutes to get the values and I’m hoping another 5 minutes to program it and that’s.

It I plugged it into the OBDII connector slot.

And put the car on position not started. 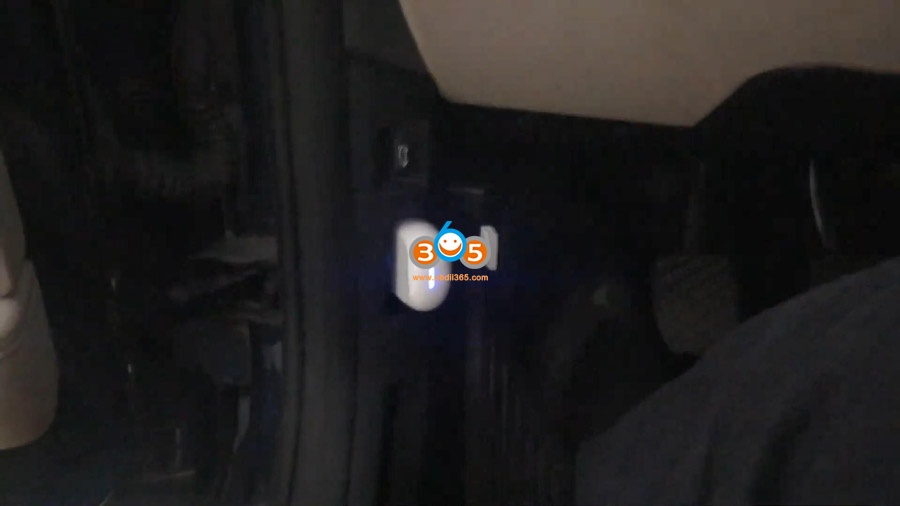 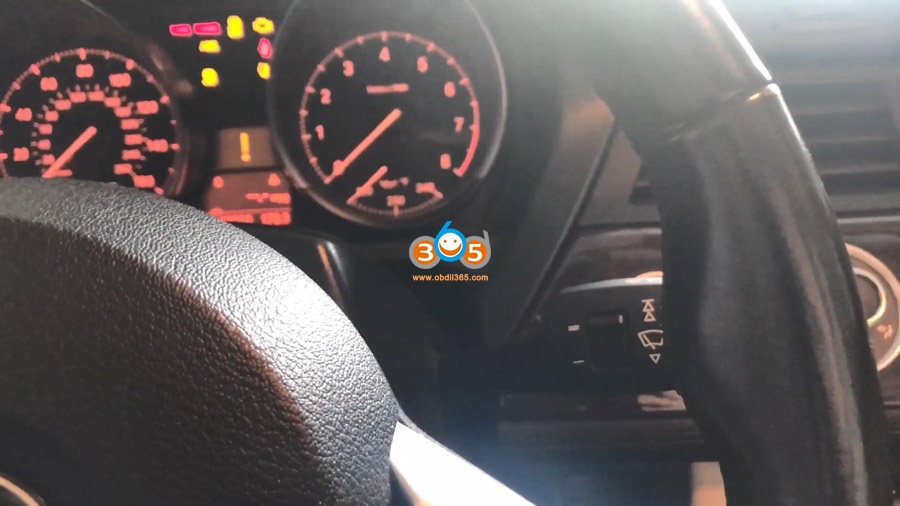 Now that we have all the information that we need we’re gonna go to “Service”, then look for the main menu, we need injector. It will take some time for everything to load you’re going to click on “automatic selection”. It scans for you VIN, so it has the proper information for your car and engine.

This scanner will now load all of the system data and all of the modules, this probably takes the longest amount of time I think it took two or three minutes. 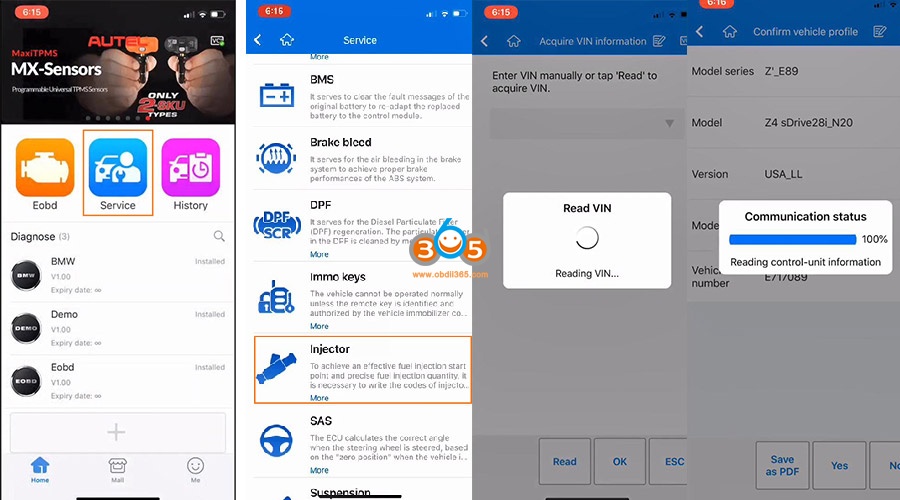 Autel AP200 scanner is really amazing, it can do a lot of stuff, it is a little slow though compared to some of my other where you can just plug it in with a cable but I think it’s definitely worth it for the price.

Now that everything has loaded you’re going to click on “Hot functions”, you can click on “Determining the injectors” to see what kind of injectors your car actually takes, if you are actually replacing them, but we need to do is go to the injector quantity compensation, that’s gonna start loading the modules again specific to what we’re actually doing and give you some of the information on what to do next, as you can see these numbers are exactly the same numbers that we pulled off the old engine so we know we’re in the right menu.

Alright and it’s gonna just ask us if we want to change those values that is actually why we’re here, so we’re gonna click yes.

And then enter the values for each cylinder.

Now that we are at the correct menu and we can adjust the values.

you have to be very careful, you definitely don’t want to put incorrect value and you know flood zone it with fuel or something like that, so pay attention I went a little slow just for that reason I wanted to read everything, make sure I understood what was being asked of me and how to properly add the correct values.

In my case it just happened to me that all the values are the same I will actually do a little bit of research on this to make sure that’s correct, even though I saw the physical number myself on each injector.

If you do have a different values for each cylinder, absolutely make sure you know which one is cylinder one, which one’s cylinder too before you start, you know entering in programming these Values into the car ECU.

Now that we have all four values entered for all four cylinders, we’re gonna apply it to the actual computer.

As you can see, it’s been asked if you want to save the adjustment values, of course we’re going to collect the F2 to confirm.

This will correct yes and then take a few seconds for it to apply.

And as the last step, what I decided to do was to check to make sure the actual values have been read into the computer, so I’m going to take a one step back in the menu after confirming the steps that it’s asking me on the screen and check to see what the adjustment values are at this time. 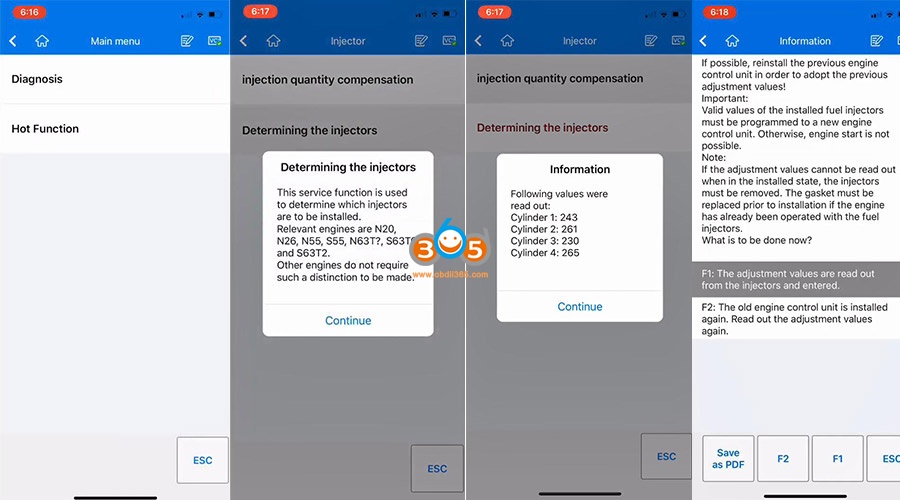 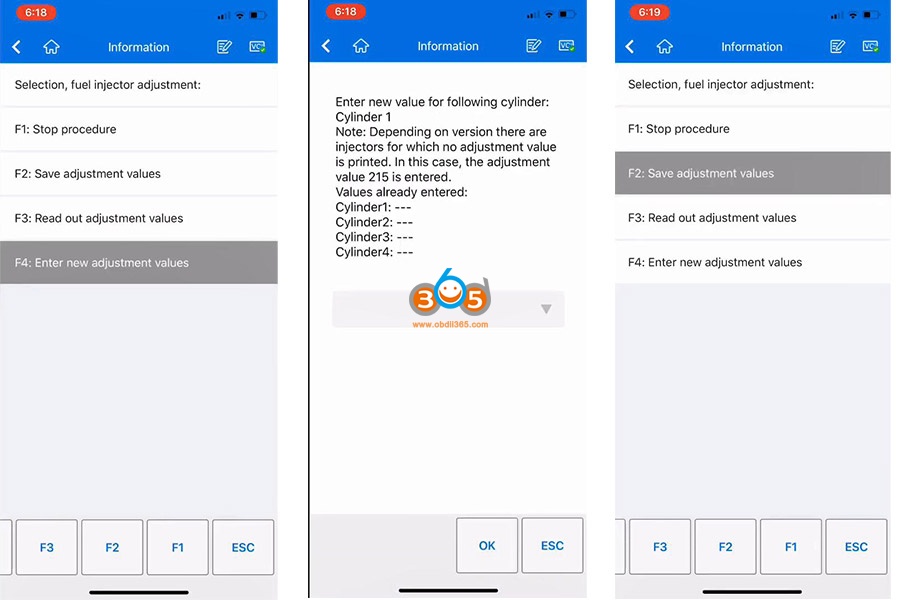 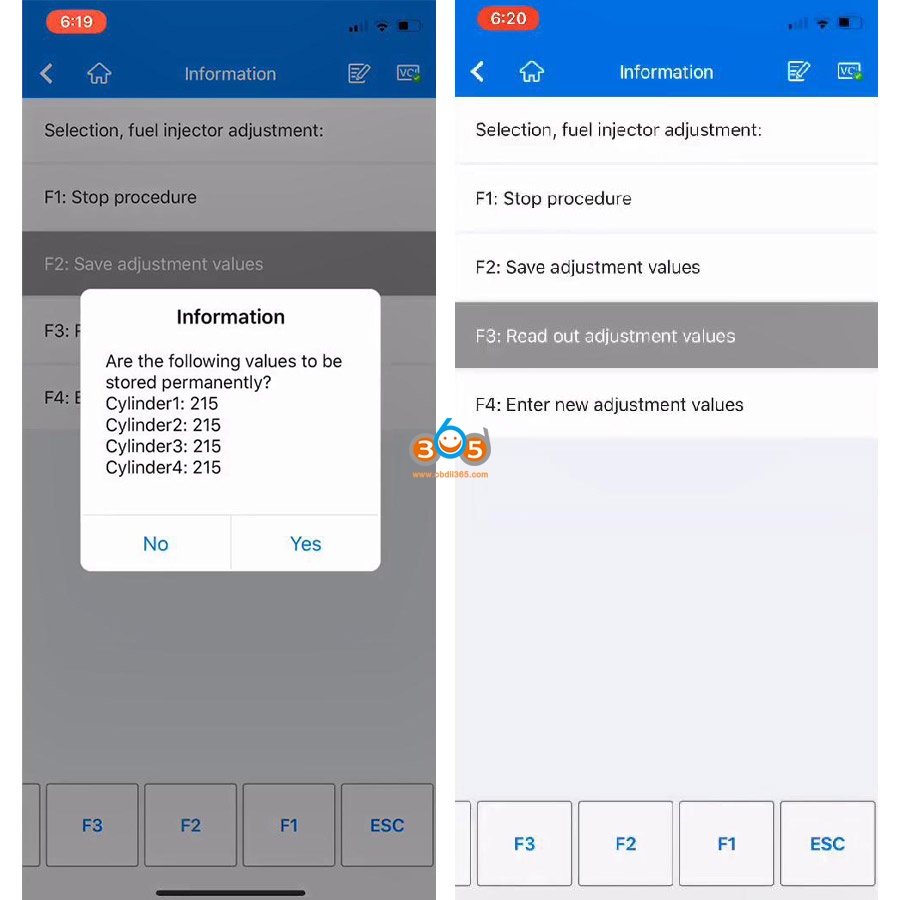 After confirming that the values are actually what they’re supposed to be that’s pretty much all we have to do in this application, you can now get out of the APP and plug it do whatever you want and ready to get the car started, see if all of this work was for something or for nothing.

Alright, so injectors have been calibrated, let’s see how she runs.

Look at that, plenty of a difference, it starts right up there’s no hesitation, it doesn’t hang around 500 rpm, right to the correct rpm and stays there. 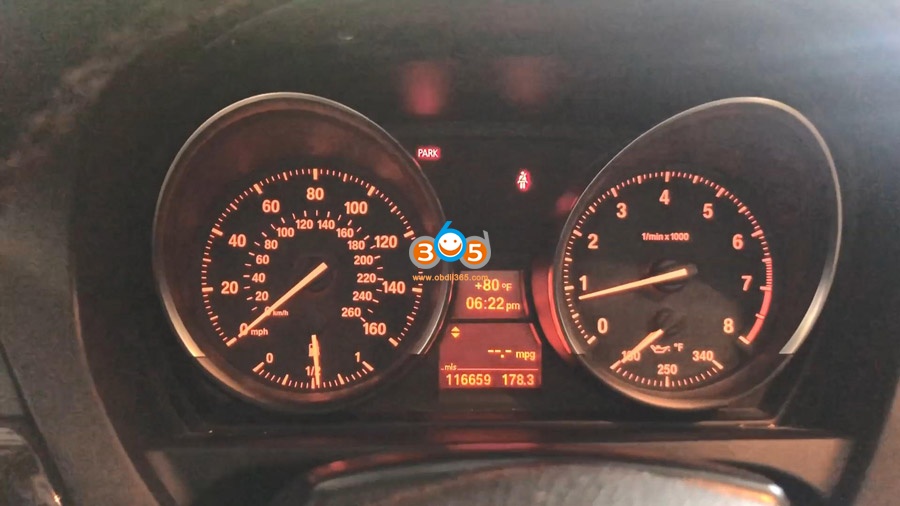 So I guess you don’t have to spend 400 dollars and a more expensive version and this works.

I’m honestly very surprised and very happy about this, so thank you for reading.

If you ever need to do this get one of these don’t spend a bunch of money or take it to a mechanic and spend 200-300 dollars on something you can do yourself in 15-20 minutes.