I’m going to be reviewing this Autel MaxiCheck Pro code scanner, it is probably a bit too limiting as far as what can perform that it has downloadable updates from the Internet from the manufacturer, and it lets you work with a long list of vehicle manufacturers from around the world. So it’s one of the big benefits, it also has program modules that you can load onto the units memory card that lets you test and perform specialized functions on the various subsystems in your vehicle. So that’s what I’m going to be trying to do with it. Today I’m going to be using it to perform an ABS module automated brake system bleed on my 2004 Chevrolet SSR, so after the intro, I’ll show you the software used update to the memory card, and then we’ll get into performing the automated system bleed and see how it works. 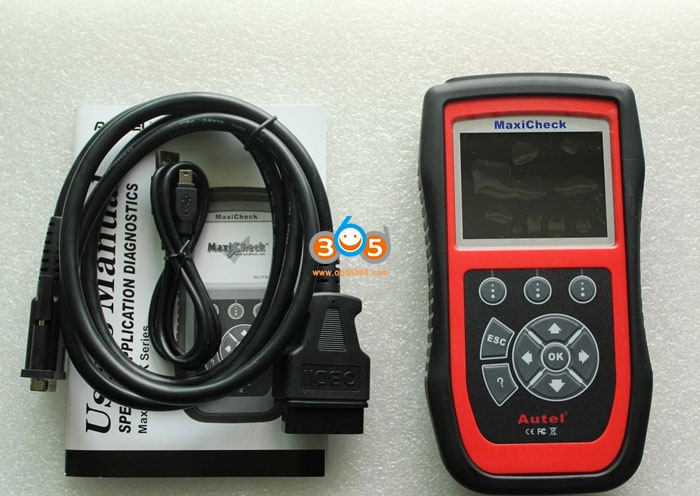 Please review the automotive information repair and modification guidelines on the screen below, seek the advice of a repair professional, if you’re unsure how to perform any repair or modifications safely and correctly, all repairs and modifications are performed at your own risk. 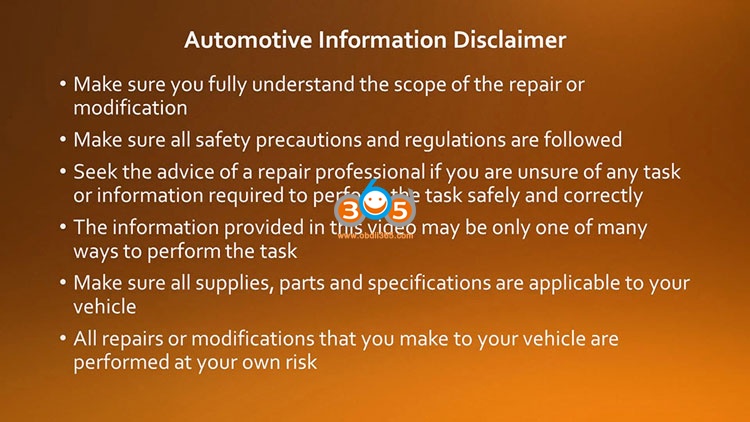 Here is the Autel Maxi PC suite software running on my Windows 10 laptop, this is used to update the memory card that is provided with the maxi check Pro since that contains all the program support modules that are used by the maxi check Pro to perform the various functions that it performs.

And install it on your computer, the additional thing here is you need to have an account, so if you haven’t signed up for the Autel website, go ahead and click on signup and establish that user account. And then once that’s established, you will be able to go ahead and login here, but notice over here, it shows that it is found on my D Drive my memory card, it also displays a serial number for the device which I’ve lured out here so you should see one corresponding to your particular device.

So I’m going to type in your username and password which you can’t see mine here but they’ve been cleared out, let’s go ahead and type those in and login. 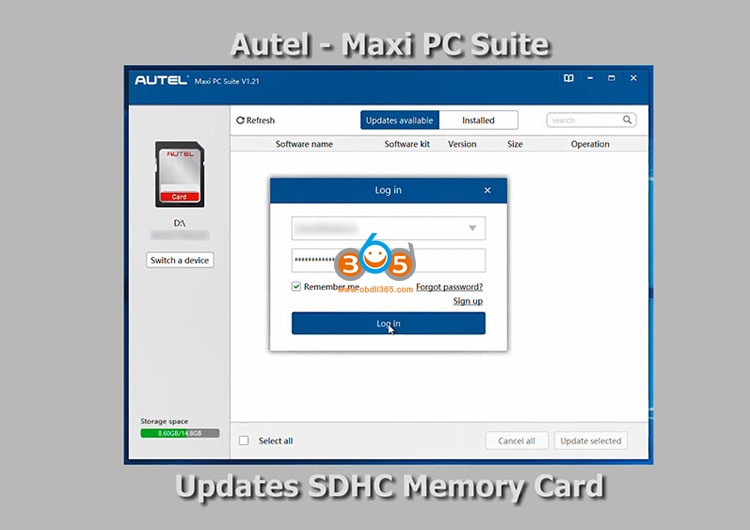 I updated the memory card earlier this morning, so apparently nothing has been released since then. 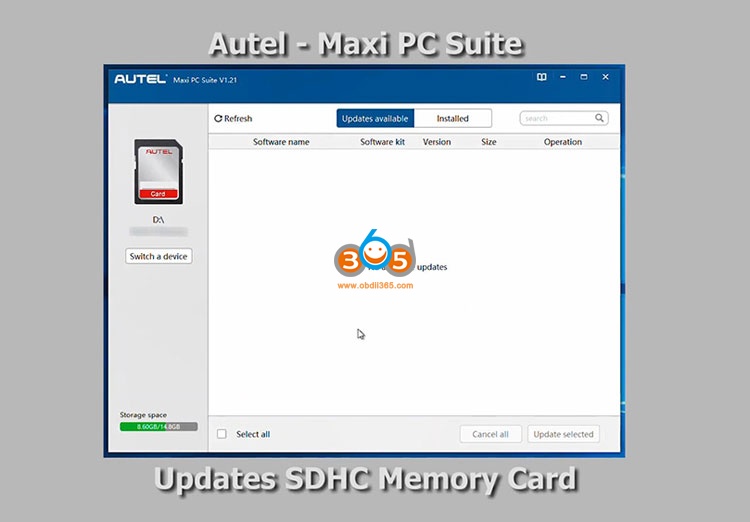 Let’s click on the “Installed” button up here and we can see a large number of software kits for the various models, basically the program modules that are run by the Maxi check Pro to perform those functions, and there’s a large number of auto manufacturers from throughout the world that are supported by this device, so you can see that virtually every car out there, that has a OBD2 port should likely be supported by this particular device.

And the software kits corresponds to ABS SRS is for the ABS and supplemental restraint system.

And we get into the BMS for battery management system. 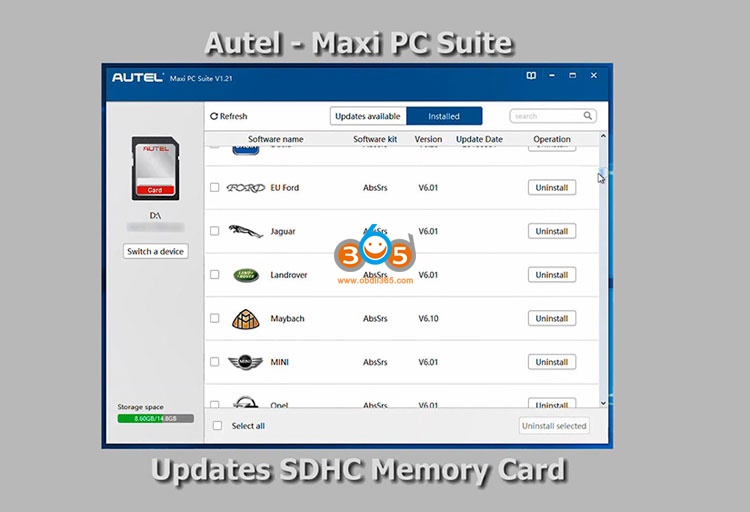 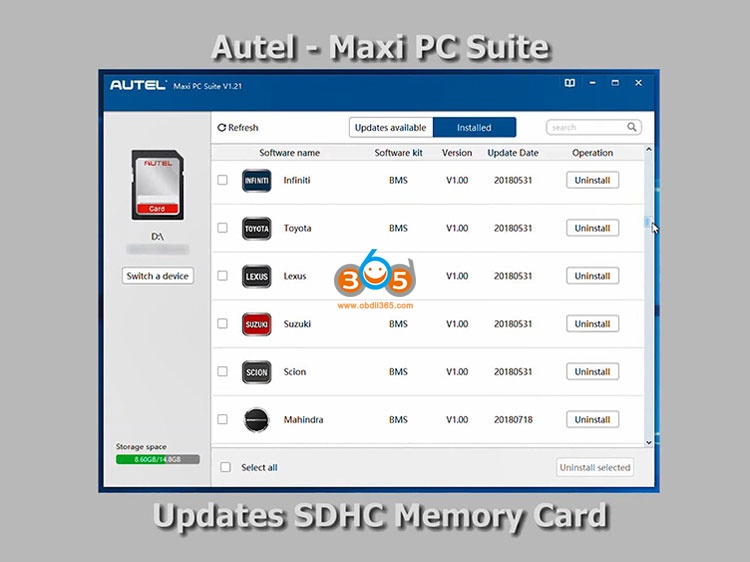 The DPF is for the diesel particulate filter management system. 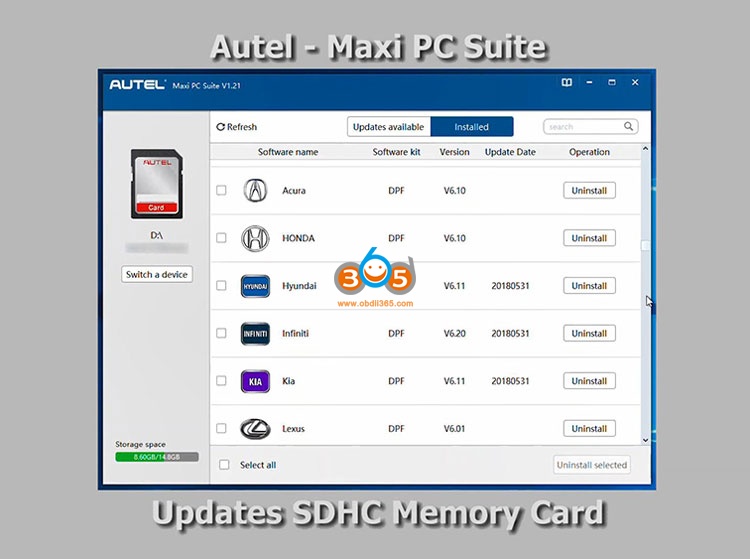 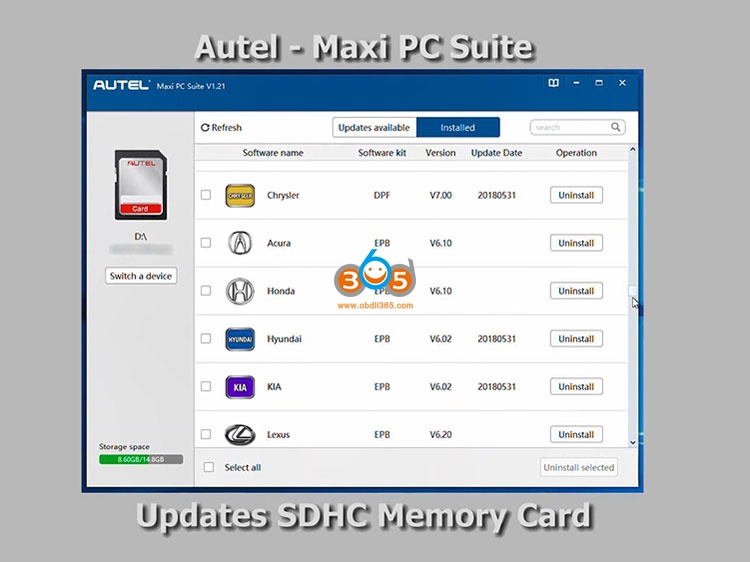 And then oil resets and various other whatever functions are provided for each of the auto manufacturers which you’ll sees an overview later. 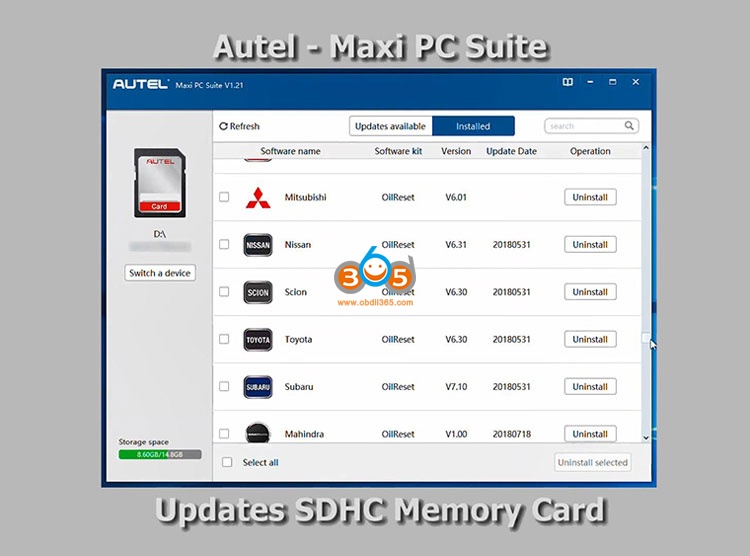 But all of the corresponding functionality provided by the Maxicheck Pro corresponds to a file on this memory card. So if there is an update available, you would see them “Updates available” and then you would select which ones you wish to have downloaded and then you would click on update selected and it would download and install them and then those would appear as the updated the install version over here on this panel. 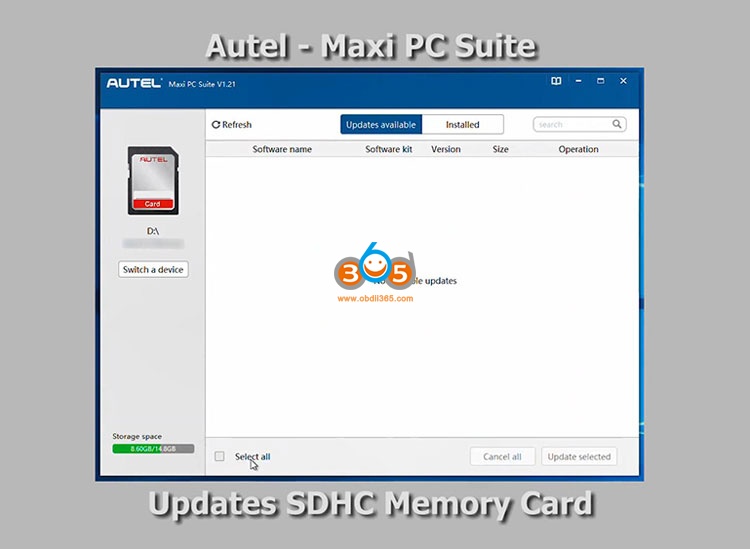 So from this point you go ahead and exit this program “Maxi PC Suite “ by clicking the close button on the upper right on Windows, then after you’ve exited the program you then unmount the drive from your Windows laptop or PC in a safe manner to make sure all the changes have been flushed out to the memory card, and then put the memory card back into your maxi check Pro.

Here is the main screen for the Maxicheck Pro which lists the various software kits that are available on it. Top left we have the “OBDII” (the main diagnostic module for this unit); 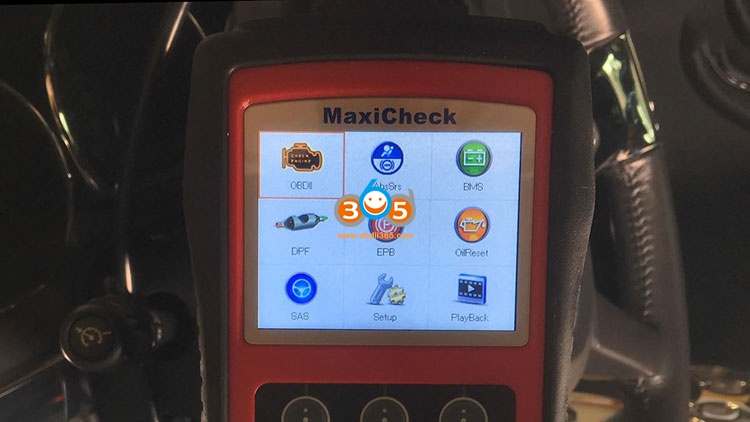 Top right, we have the battery management system;

Center we have the EPB which is an electronic parking brake which will have a module that can potentially calibrate the operation of that unit;

The center right is the oil resets for oil management and tracking systems on various vehicles you need to reset that indicator a system when you change the oil in the vehicle that can be used to do that for you;

The bottom left is SAS steering angle sensor calibration can be performed with that particular module, if your vehicle is supported;

The center bottom is the “Setup” such as language selection and various other options for the maxi check Pro;

The bottom right is the “Playback” of any recorded data that was captured by the unit while connected to your vehicle.

I have an Autel Maxicheck Pro now in my Chevy SSR, are going to go ahead and plug it into the OBDII port, so you have ignition starting in the off opposition, plug the device into the OBDII port and then you turn the ignition on, but do not start the vehicle, so proceed with that.

This should power up once it receives voltage from the vehicle which has and now I will initiate the ignition on sequence, so here we have the main screen for the maxi check Pro and the various subsystems and tests that can perform a interrogate, so I’m going to go ahead and check the main OBDII port, right now just to make sure I’m starting off with nothing in the no codes to start with. 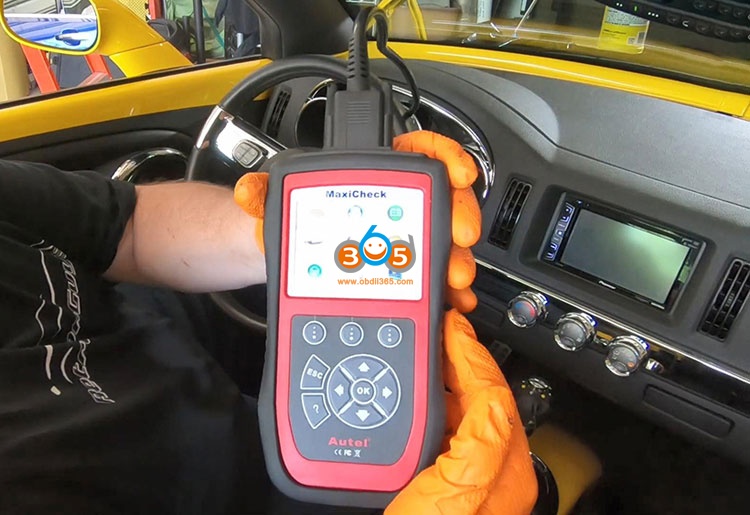 So now I’m cleaned to begin with.  So let’s go ahead and select OK.

And it’s interrogating the database to figure out which protocols being used by this particular vehicle.

And it’s now showing that my system status is a little status for them malfunction indicator light is off, there’s zero code founds, there’s three monitors on this vehicle which are not available. The monitors that you can have for readiness of emissions testing the monitors that are okay are seven and monitors incomplete are zero, so there are no monitors and incomplete state or pending state so that’s good. 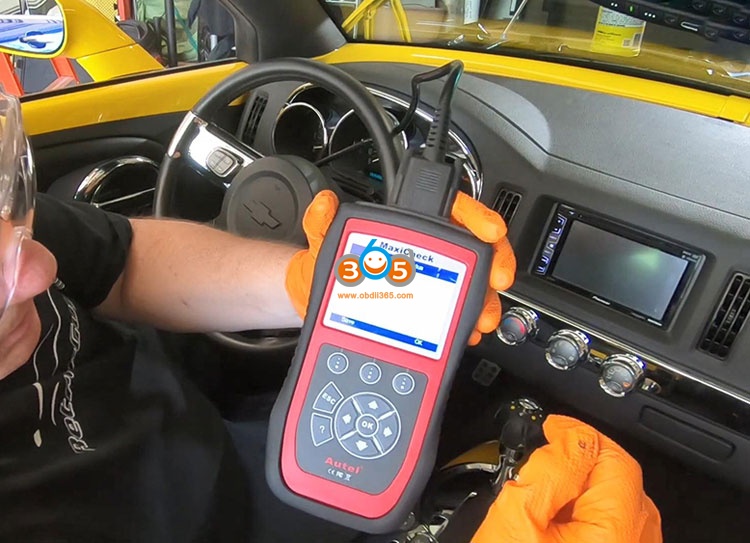 So let’s go OK to that and I’m going to go ahead and read code just to see if there is any stored codes and there are no stored codes. If there’s any attending shows on the vehicle.

And there are none. 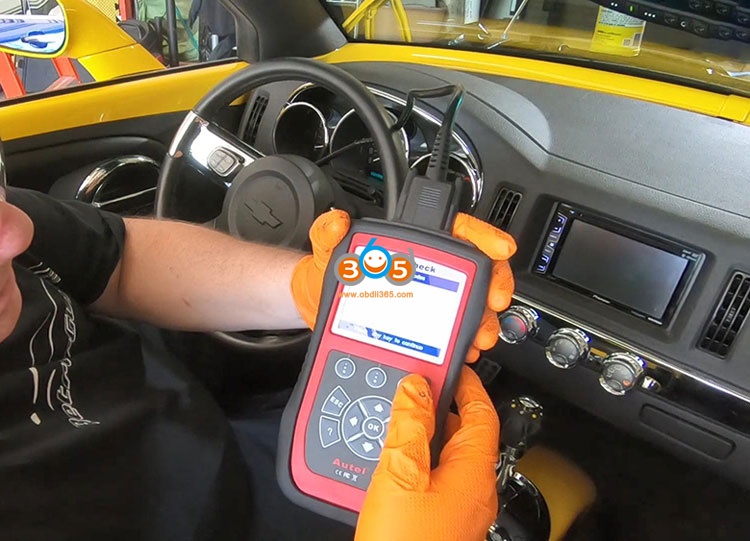 Alright, so I’m gonna go back out to the main screen  where the ABS SRS module for this particular Maxicheck Pro so I’m going to go over one and select that.

And I’m going to go to USA, then GM. And you need to identify the vehicle that you have ,so you can do use the proper program to check and verify and perform tests, this is a 2004. And it is a light duty truck, it is Chevrolet.  And hopefully we find a Chevy SSR are on this list.

Let’s read the trouble codes, make sure again we’re starting with no fault codes, so I don’t want to perform a tester function on something, I’ve got problems with but there are none.

So let’s get back out to “live data” on with this device, I’m going to go down into special functions. 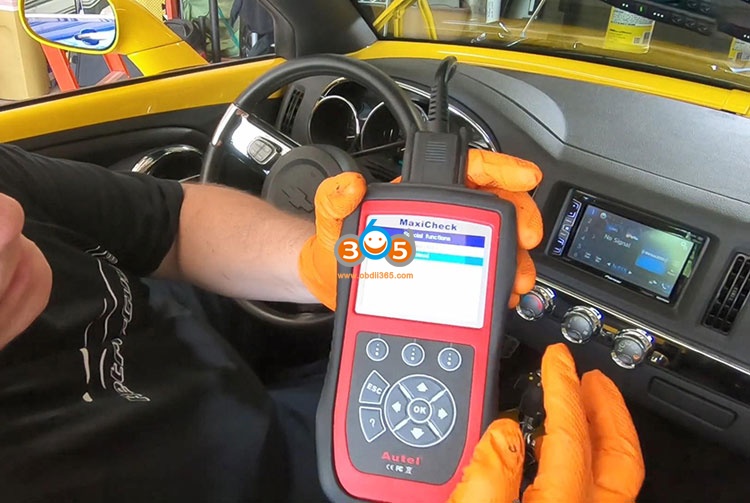 Important: referred to the service menu for more instructions. I’m going to continue.

So I am I have the parking brake set. And I have already checked my fluid level, so let’s start shift transmission into park slash neutral, it is currently in park.

Apply and hold the brake pedal for test activation, I will brake conducting.

No DTCs is audibly completed.

Alright, so let’s go out one level, make sure go back into an SSR, and again look for any trouble business to make sure it wasn’t just representing that and no fault codes detected.

Alright. So that’s one function that I’ve never been able to perform with any of the other code scanners that I’ve had for the SSR not.

On the bottom, there is a USB connector, so if you want to power with a usb power source, you can do so, and here’s the memory card that is where all the modules and actual functionality is stored is 16 gigabyte memory card, that’s where it plugged into the device, and I believe there’s also a power port on the top for optional external power supply. 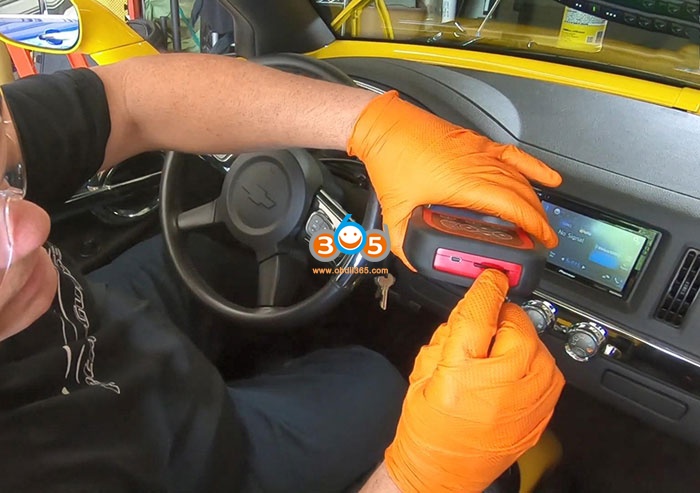 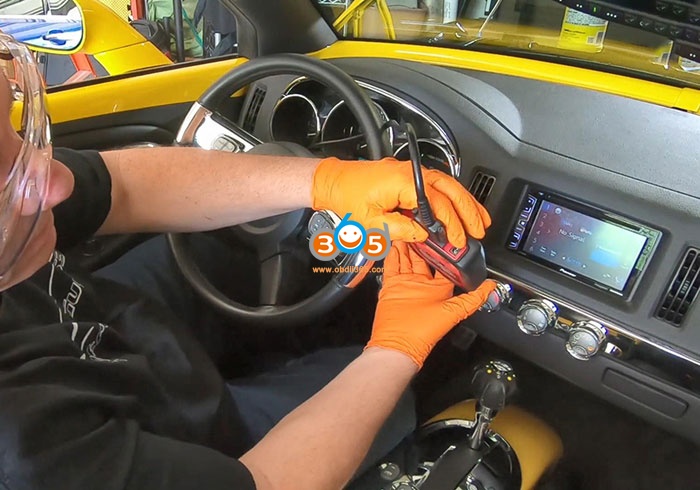 Conclusion: So what do I think of the Maxicheck Pro?

so far I’m very happy with it, it does what it says it’s supposed to do, it does have the automated bleeding procedure for the ABS module on this 2014 Chevy SSR.

The version of the test that documents in the manual is which an example actually shows some screens where it has you open up the brake line in each of the four wheels to perform an actual brake line leed the GM version apparently at least for the SSR, it has an implementation where you are just holding the brake pedal and it performs the test so that doesn’t seem it doesn’t support the individual brake line bleed at each wheel.

So after the procedure was done I tested the sponginess of the pedal and I actually got a little bit worse, a little concern, so I decided to perform a full system bleed after the automated bleed I wasn’t expect to get any air out of the system, but much to my surprise, each wheel I got a hit of air out of the line which I have never been able to get out with those lines before I usually do a brake system bleed about every two years and full system flush and usually there’s no air in the system.

This time after the automated blade I actually did the air out of the system in each of the wheels, some wheels had a little bit and I think in the driver side rear, I actually got a good couple inches of in the clear tube. I could see a couple of inches of air, so I believe we may have to purged the system finally of that extra air , may have been there the whole time. So I’m hoping the automated ABS belief for this vehicle is in beneficial and so far the brake pedal is about 70% firmer than it was before much better response out of the break after I took it on a test drive in performing both the ABS motivated one and the manual system, really much better.

So what I say the Autel Maxicheck Pro is worth it for what it can do, I would say 165 dollars it’s a Bargain, you can interrogate the codes for the generic code for any vehicle.  It seems to have under specific or vehicle specific code, it can interrogate also the various substances like the ABS subsystem and the supplemental restraint system.

Wide variety of things it can do and 465 dollars you can bind other code scanners that don’t do half of what this one does.

So I highly recommend this if you’re into using a hand held scanners for your vehicle I might recommend you go out and find the Autel Maxi check Pro and give it a try for yourself.