So what would be the difference between NT510 multi-system scanner  and Carly app in terms of diagnostics? I know coding wise there are pros and cons between them.

Carly can read and clear codes, also can register batteries at $15 a pop. I don’t think it can code injectors though… at least I haven’t been able to find a way.

The nt510can read OBD codes from any car and also do specific vehicle operations to BMW / Mini / Rolls. It’s a lot better in terms of diagnostics. It has a lot more functionality in terms of reading live data, freeze frame data, activating individual components to check for faults etc. If you had a tricky fault i’d say you have a much better chance of pinpointing it with the Foxwell tool.

The interface and connection is also a lot better than Carly.

I like the fact that Carly can do simple coding but in general i’m not a fan of their interface and their connection is pretty bad…. even when compared to other wifi based iOS OBD apps

Both are great tools, depends upon what you’re looking for. Coding and serious diagnostics should always be done over a wire in my opinion. Actually for coding, I use INPA/NCS.

If you want something you can just leave plugged in and read codes or just log if you feel like it, it would seem Carly is the way to go.

For quick reference I have the dongle in my car and my phone is always in my pocket, for more detailed scanning I like the Foxwell NT510 scan tool over app based tools. 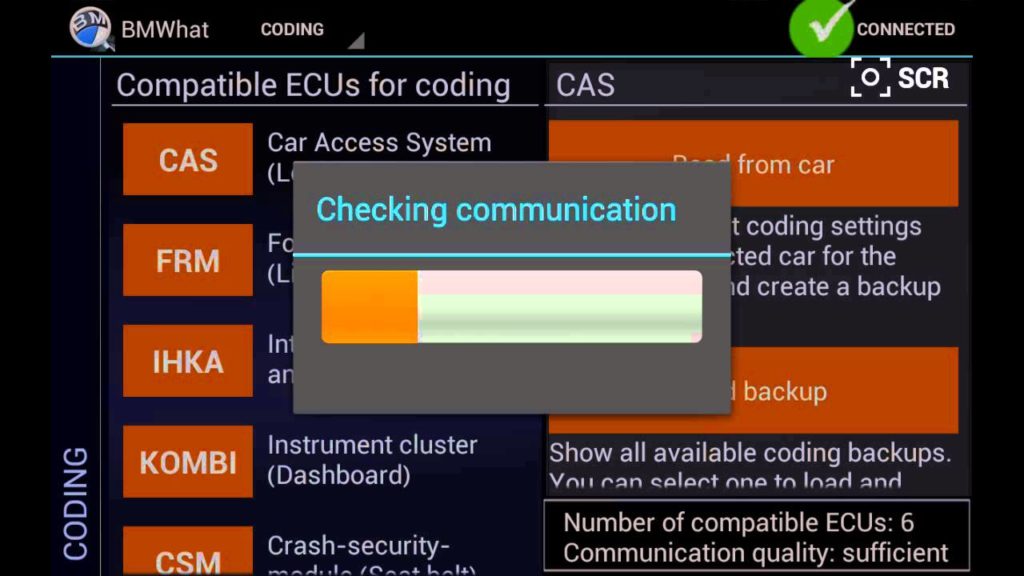 I used Carly for my wife’s previous E88 128 convertible and it worked great – no having to do one item at a time, etc. Not quite sure what the problem is with the F-cars, because the principle is the same – read coding data, modify, write coding data. Apparently the new “network” and whatever read/write protocol that implies is far different than the CANbus of the E-series cars.

By comparison, E-Sys has improved vastly over the past year or two and coding both my F30 and the wife’s new F23 was relatively easy, particularly since you can save the coding data, disconnect, take the computer inside to do the modifications on a copy of the saved data, then reconnect and push the data back using the modified file. No more sitting in the car searching for the feature to be coded while the engine’s idling.

Ps. Actually, the Carly adapter is Bluetooth. E-Sys looks for a connection via the ethernet port on your laptop. It won’t recognize BT at all – at least, I’ve not been able to make it do so. If your laptop doesn’t have an ethernet/RJ45 connector, you’ll need to find a device that does. Pretty sure that you can’t use a USB-to-ethernet adapter, either.
NT510 BMW review:

it support reprogramming of injector values and Engine idol speeds and it can be used on it, so far, everything is OK,

able to find 2 misfires because of bad plugs.

Managed to do battery registration

Can can provide sensor data from the oil level system on an F82 M4, The M4 apparently can only read the oil level with the iDrive, which we plan on permanently removing for non-street use.

Can determine which wheel speed sensor is bad on 2007 328i Coupe.

Have the ability on the 09 BMW E82 135 to scan for ghost codes, and any other stored codes. For example, example it will read codes that you did not get a scanner connected fast enough while the check engine light was on and it goes off before you know what the code actually was.

capable of functioning as a universal OBDII reader for all makes in addition to it’s BMW/Mini/RR Specific functions.

Have E36 OBD1, for OBD1 cars will require adapter ES2992111 to perform function, Available features will be dependent upon the cars abilities. Not all features are compatible with all models.

Communicates via the obdII plug in the cabin on the E39 M5 2000, no extra adapters needed.

can read and reset O2 sensor readiness codes but will not code them off permanently.

Updates can be skipped; sequential installation of updates is not required.

Can reset “Right/Left Cornering light” warnings on 2011 335d caused by after-market halo installation. To properly clear the error code you need halos with proper  resistance, this will cause the car’s computer to automatically reset the warnings.

Ok to modulate the e-parking brake on a 2012 BMW F10 to enable a rear brake job with rotor replacement.

Can do battery registrations and coding on BMW and mini cooper.

Can reset the adaptations needed after an e46 m3 smg clutch change.

Can code for Xenon headlight conversions and also for activating *Sirius Retrofit Enable Code (FSC)* for Mini Cooper R56’s, but only some models not all.

Can’t retract the calipers on a 2005 BMW x5 4.4i e53.  The E53 does not have electronically controlled calipers. On the E53 you’ll manually compress the pistons after removing the caliper, please see the following tools to assist you with this task, ES8211 ES9747 ES2153340

Be able to display the sensor’s output if this function is registered by the car’s dme.

pull codes from the SRS

Allow coding of the LCM and GM on BMW vehicles.

Have the ability to program new ABS components to current vehicle.

Module recoding and programming is possible with this tool.

TPMS receiver..depends on the vehicle

Whether NT510/NT520 Pro can read TPMS codes or not (Specifically to tell which TPMS receiver is malfunctioning), it depends on the vehicle,If your car has the ability to provide this information the tool will be able to pull this data.

computer and system for software

The included software is not native to Mac computers.