I am writing this article to show why I started my programming with MaxiFlash Bluetooth, because they said it was compatible to start programming it with.

So I am using my Autel MaxiSYS VCI 100 Bluetooth interface. 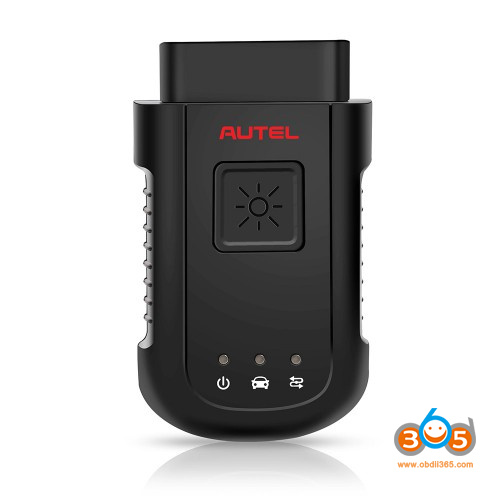 What I’ll do now is with this VCI 100, it is a standalone device which means you can use it alone and Autel has given us API for your computer to see it as a J2534 device so when you know the kind of protocol, you are dealing on your machine, it helps you a lot.

So you can see this VCI 100 comes with the Ultra MS906BT and the Elite most of the Elite, so it’s a standalone device, but it has the can protocol for both J251 and J252

So this is the specification of the device which means it boots up on a seven days battery and it returns on the light, this machine boots up and the newer ones also come with a VCI200, which comes with a CAN FD and other things which comes to CAN FD. So they’ve added the newer protocols so that device. 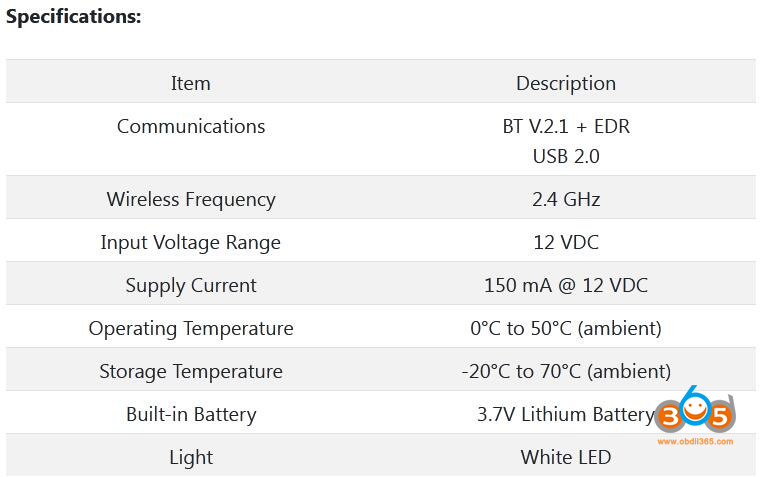 So let me register and that’s where you can know your VCI kind of protocol it can handle. 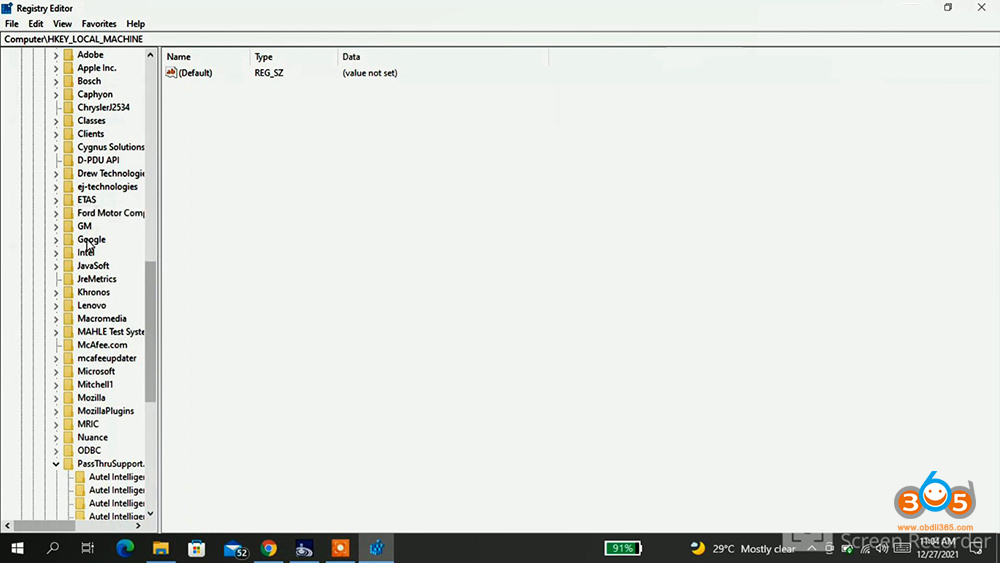 I am searching for is the PassThrou Device, for anytime your software wants to communicate with a vehicle, it has to use this APN and it will use the pass through device to communicate with the vehicle, so it will send a set of instructions to the vehicle, so this Pass-through device they are having versions and this one is version 0.4.0 and they’re having another version which is passed through supported 0.5 and this version only Drew technology which is CarDAQ-Plus 3 with this supported function. 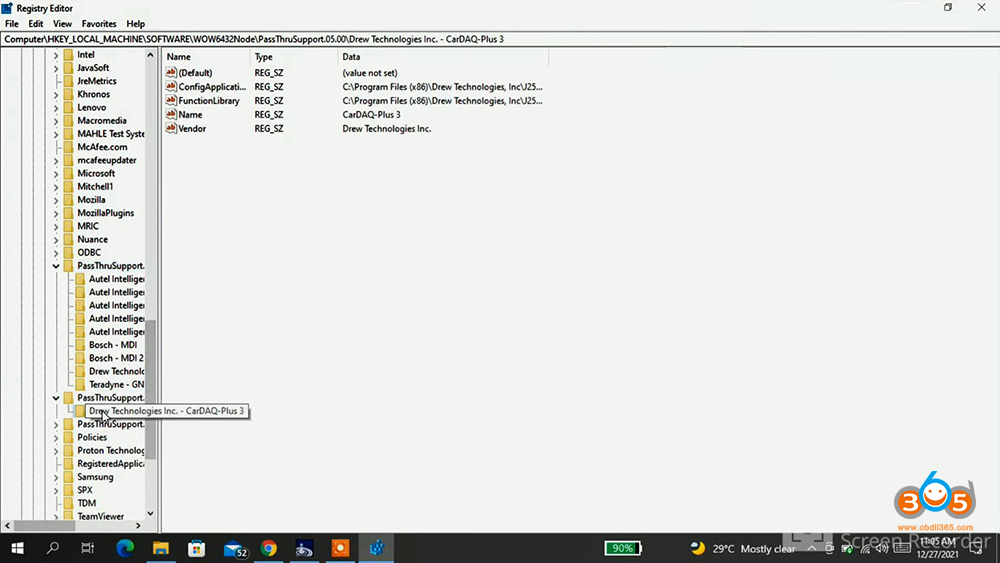 So when you go to the GM DoIP, these are the protocols when you edit this password. 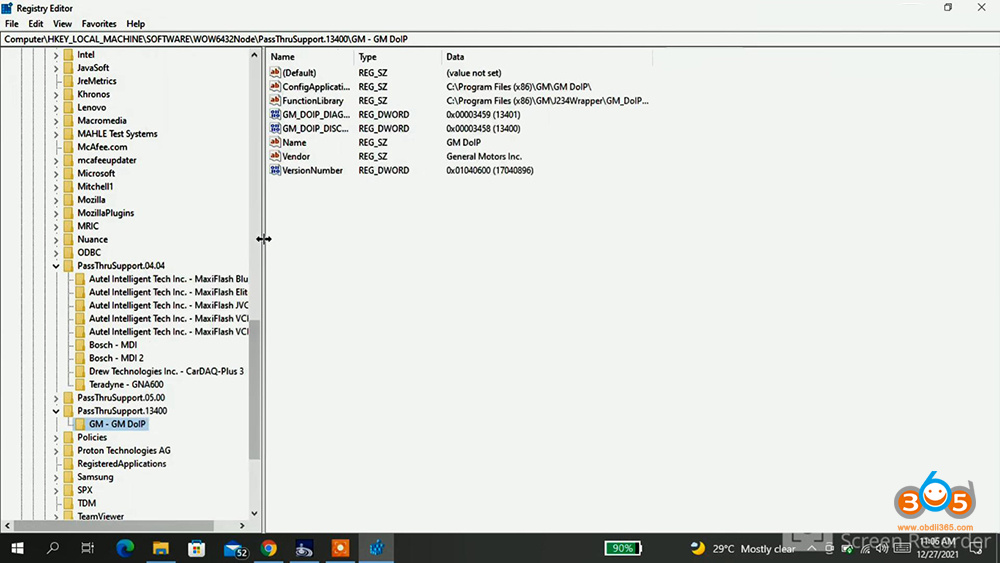 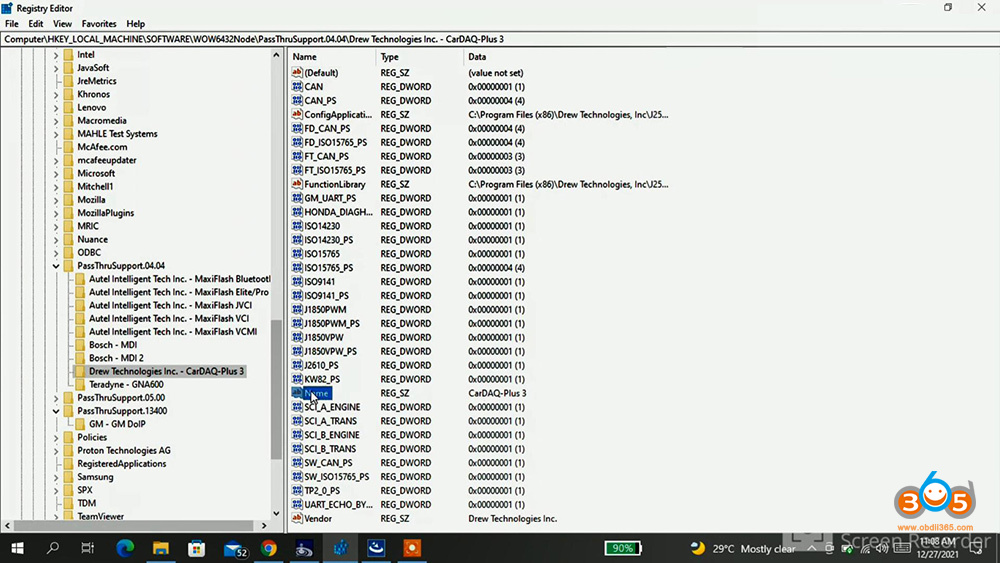 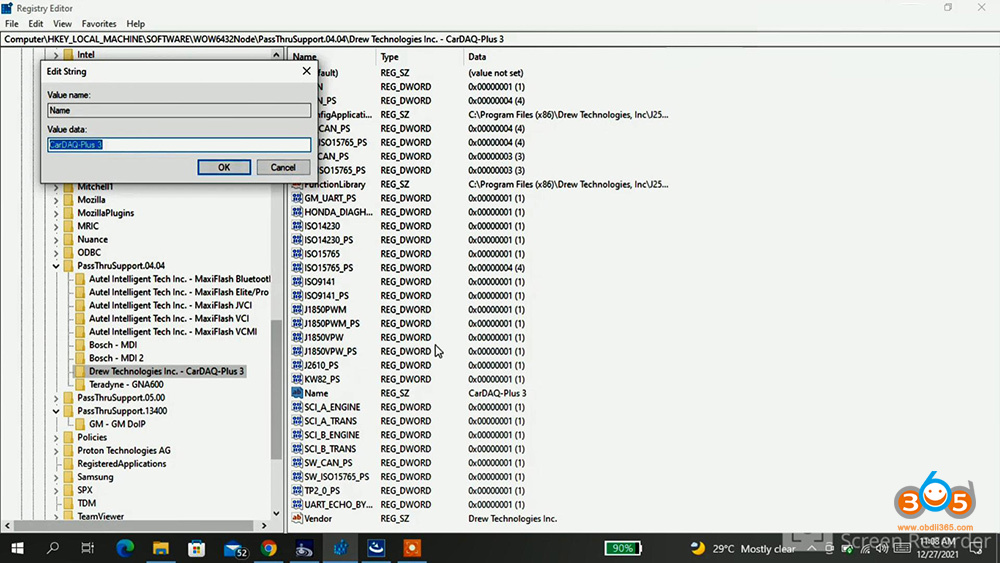 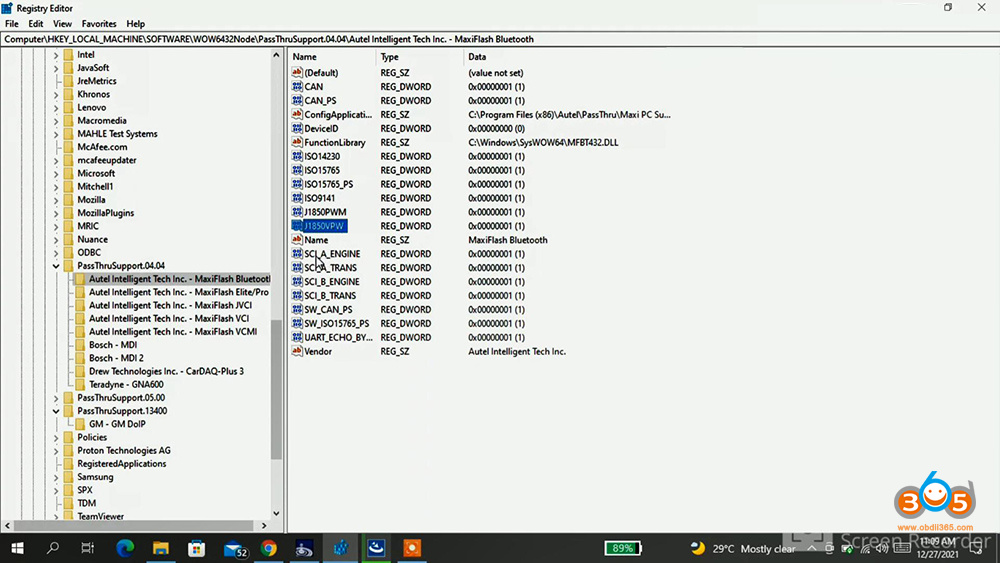 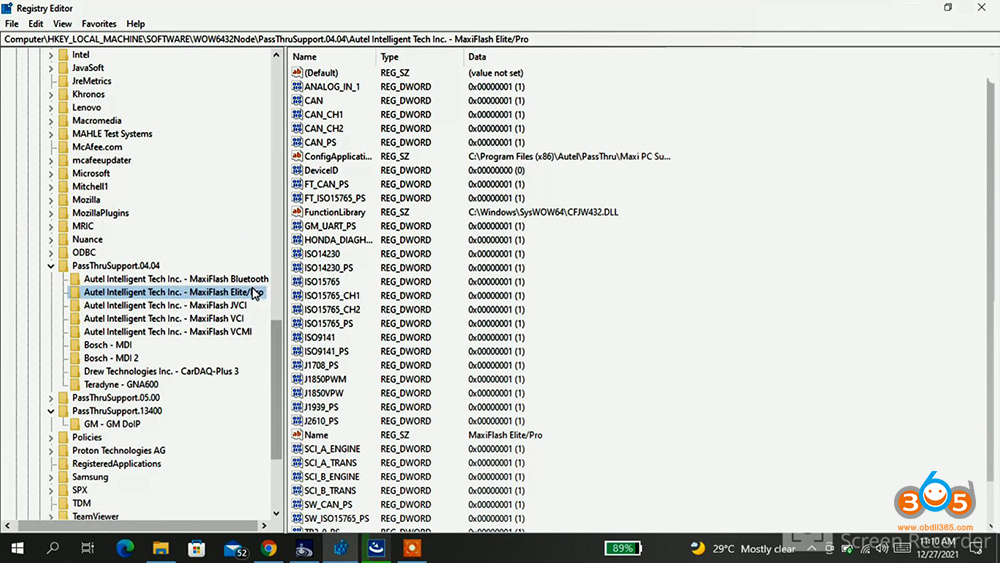 So when you come MaxiFlash JVCI, also has its protocols that it works with, so all these ones are the protocols that your car can communicate with it, so the moment I change this name I click on this name. Anytime I select this path to come, it’ll be in that name. 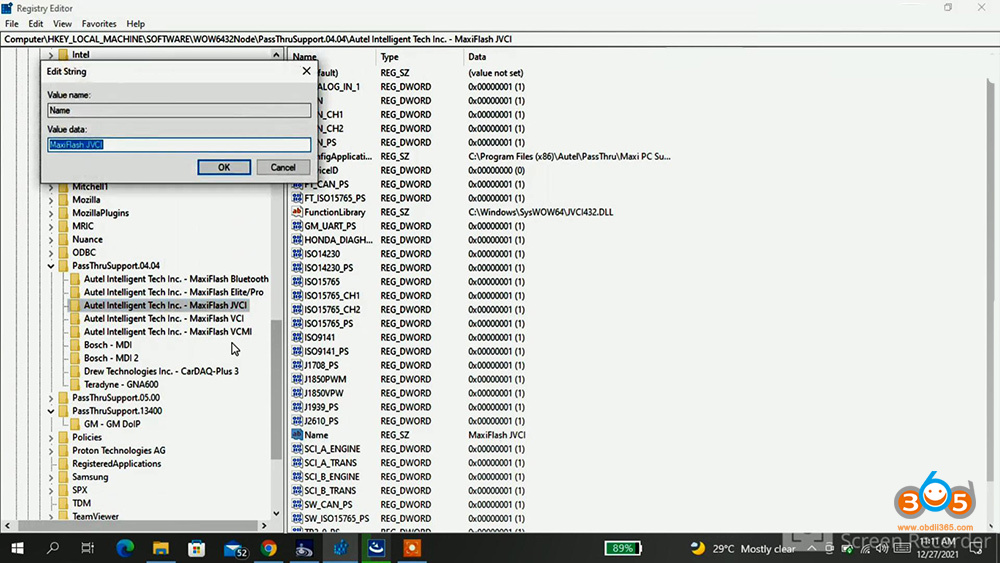 So what I do now is let me open my notepad and do a little edit. 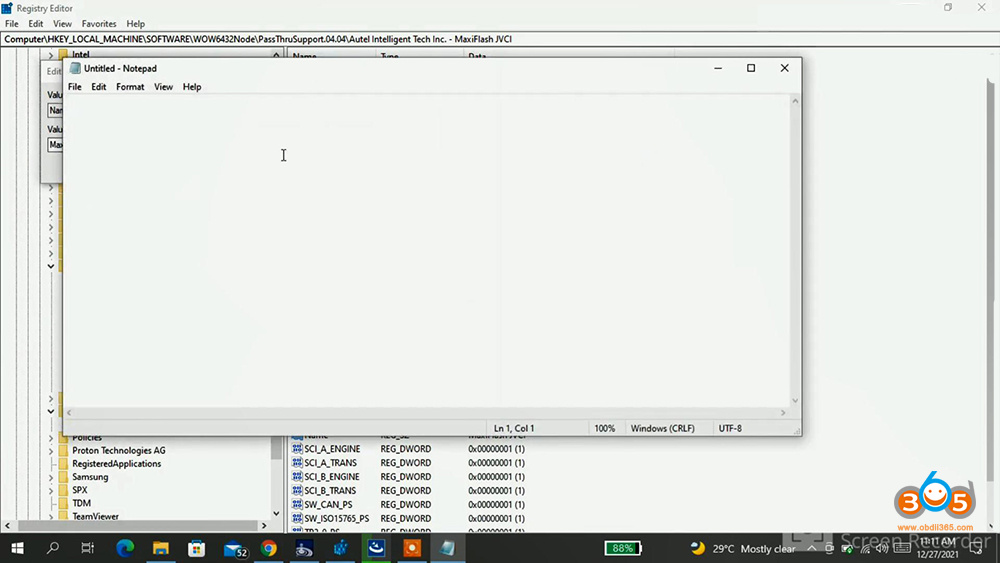 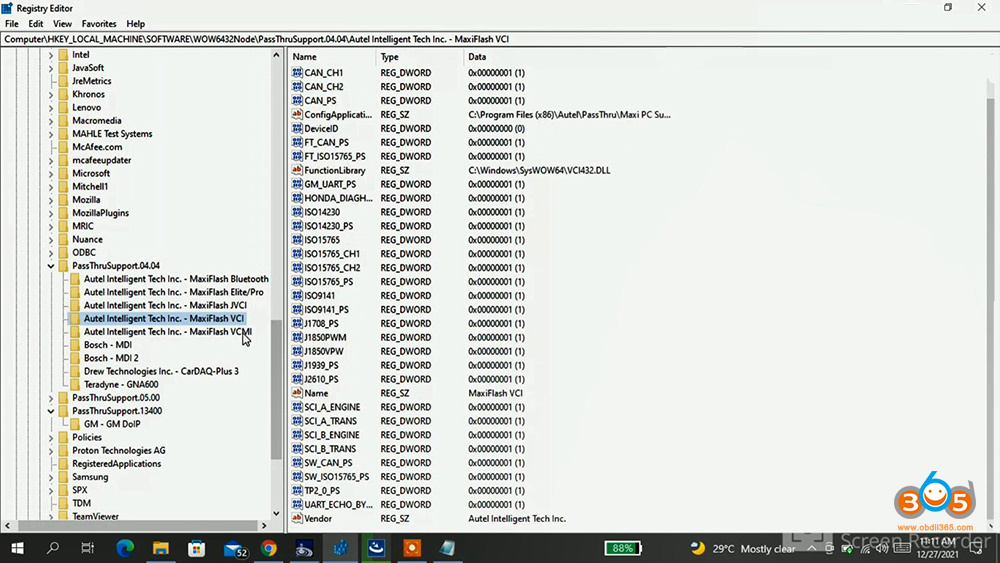 And MaxiFlash VCMI and its supported protocols. You can get all the protocols that it can support, so if your vehicle is able to communicate with a scan tool when you are using the OEM software and your device is under the past-though device 0.4 depending on what the manufacturers are using because manufacturers also use 05.00 pass through so when they are connecting to them like Nissan like this most of the Nissan software when you install Nissan software, it uses the 05.00, so that means the scan tool can communicate with it, I can use kayak for it, so you come here, you can see also the protocols so there’s the Honda protocol that you can use for programming, most of the cars. 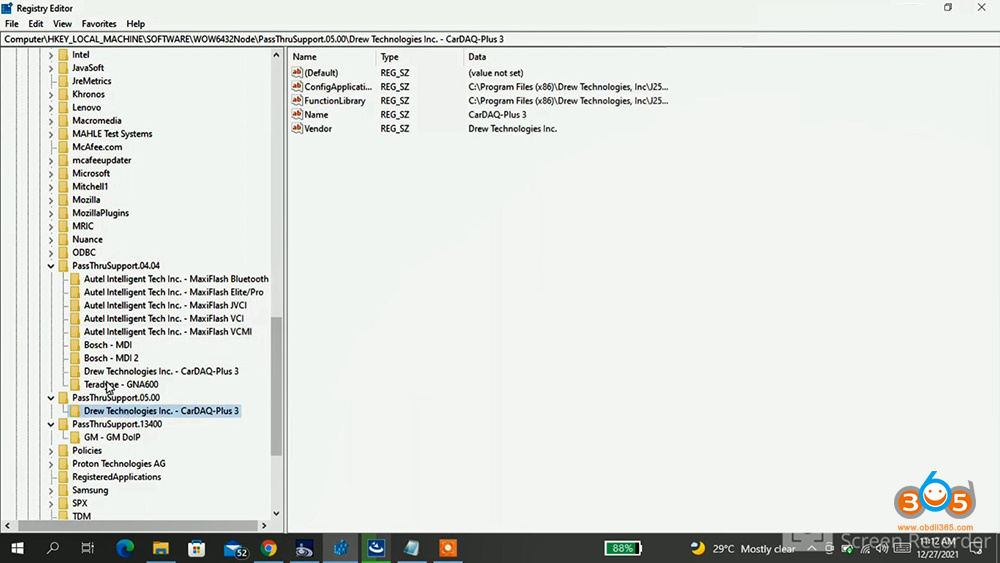 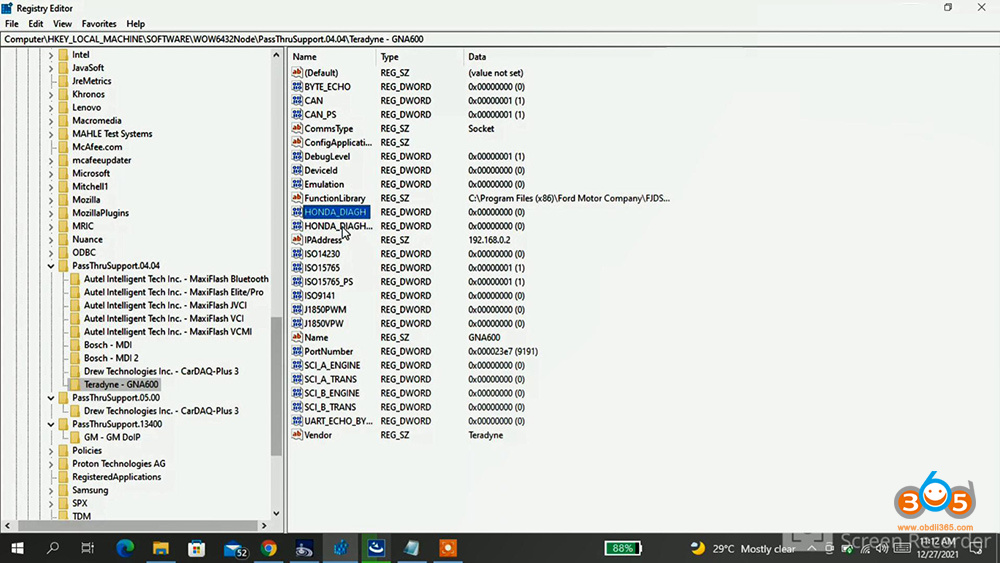 So let’s go to “Bosch -MDI” and you can see the protocols it supports. 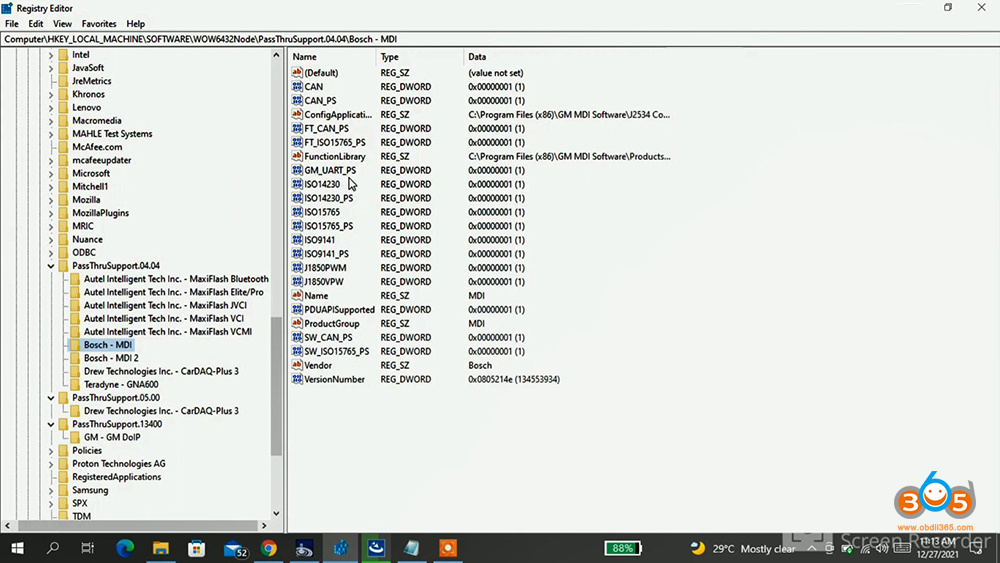 You can also go to “Bosch -MDI 2” which is for GM vehicles and you can see the protocols it support. 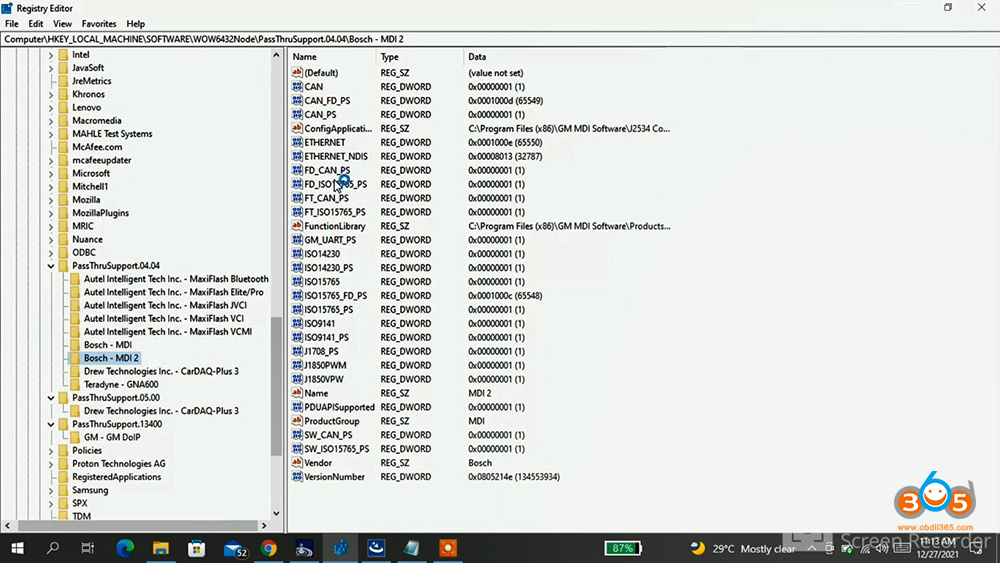 And go to “Drew Technologies inc. – CarDAQ-Plus 3” and the protocols it supports. So it helps you to know the kind of tool you are having and the kind of capability or how your tool can be used. 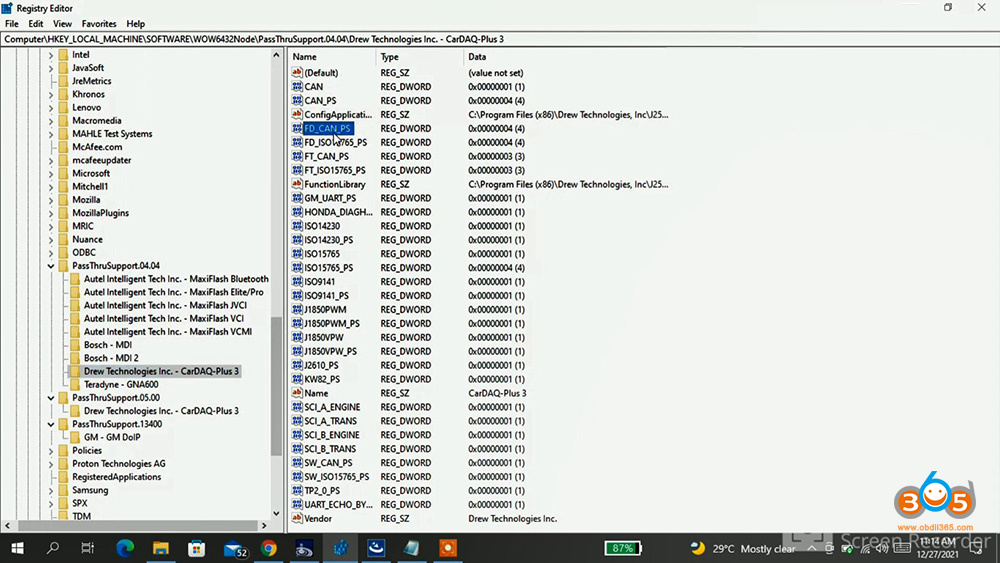 So with this one it helped me use my tool for a while. I started programming with this tool, I’ve never felt before if I failed then it would be a software issue or the software just crashed on me or something, but the moment I know this car down programming is an old model and is using any of these protocols that one I’m free to go, you can see there’s no empty FD can in this set of protocols, because we can’t use it to program FD cards and delete most of the latest vehicles but you can use it to program like from 1996 to 2016 or 17 or 18 depending on the manufacturer protocol, they are using on the exact vehicle. 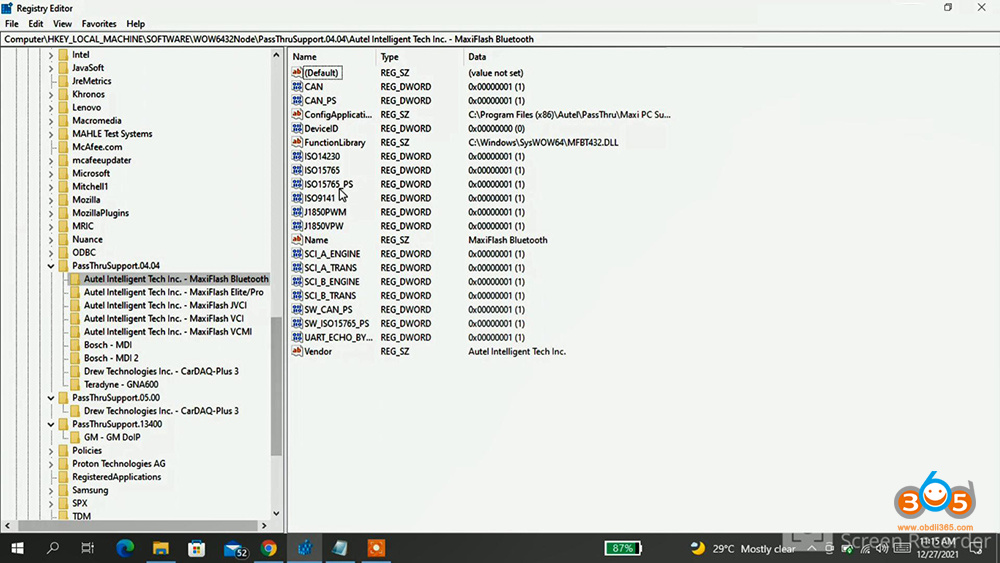 So when you’re doing a programming, you can first install the manufacturing software and see if they have the requirement for.

so let’s say maybe you want to do programming for jeep, Chrysler cars and you want maybe an external or let’s say Range Rover which is using DOIP for programming.

You can check if your MDI or if your J2534 device supports that kind of protocol and if he doesn’t support it then you know what to do like the way this one which is using “GM DoIP”. so you can see the protocol for the diagnosing so that means from 2020 to 2021 GM vehicles which supports this kind of protocol, I can’t program it because my J2534 device doesn’t support it. 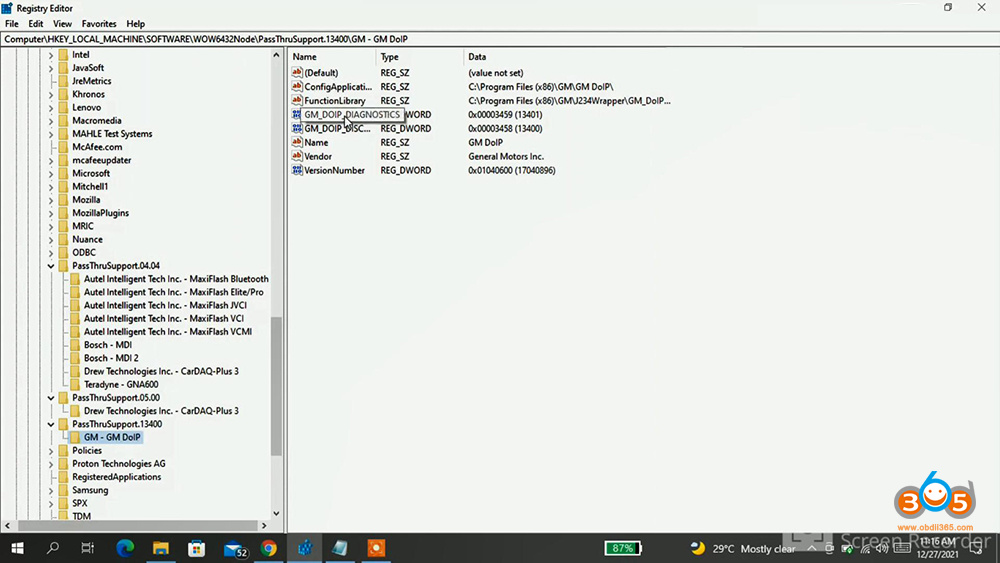 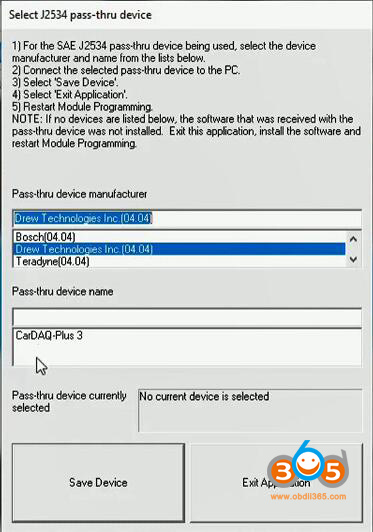 The time the thing I do is I started drivers and check, so these are the manufacturers that I’m having now and Ford is still under their 04.04.

When I select the “Autel Intelligent Tech Inc. [04.04]”, you can see the list of MaxiFlash Bluetooth, MaxiFlash Elite / Pro, MaxiFlash JVCI, their drivers have been installed on my device. 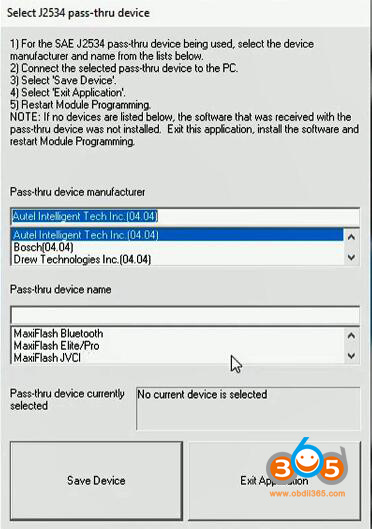 When you want to trick the system, also you have a way of doing it, so let’s see I’m selecting the MaxiFlash Bluetooth and I know it when you select to save it.

and you exit the program, just for demonstration purposes, I’m not using it.

Let me go to FORScan, you can see the list of J2534 devices that can select which means I’m having these device drivers installed on my laptop even though I’m not even though the devices are not connected yet. 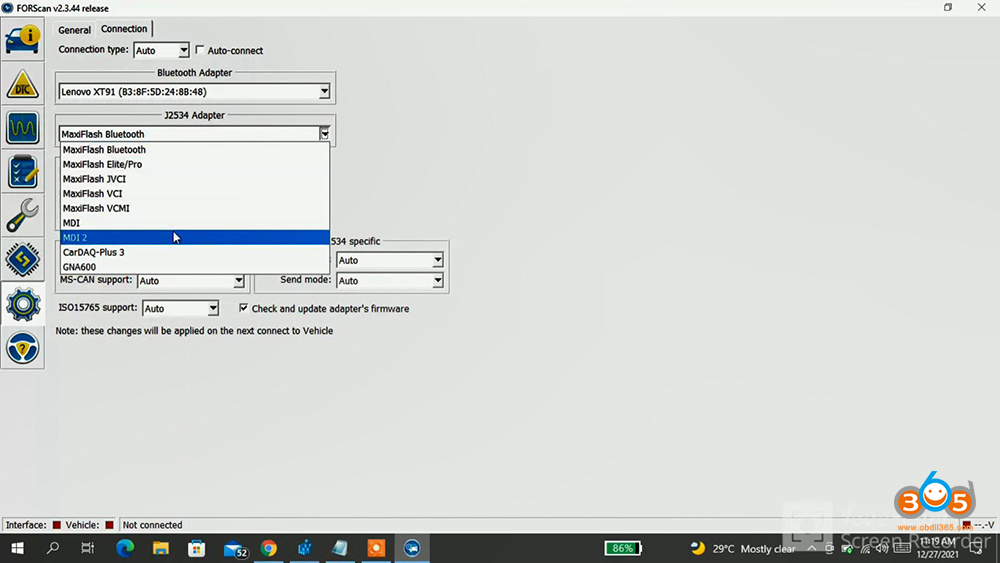 I will do a little editing for us, so we check one or two things how the manufacturers are using it.

so login and to try to search for a connection if the device has been connected, so let me go back and close the whole application. 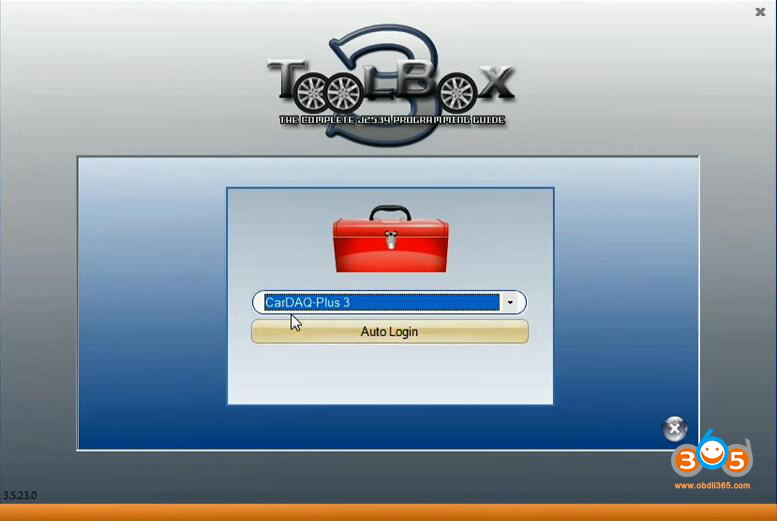 And go to red edit and try to go one or two edit, so let’s go to this and click on their name. So when I click on the name, what I’ll do is I’ll cut the name. I’ll copy the name. 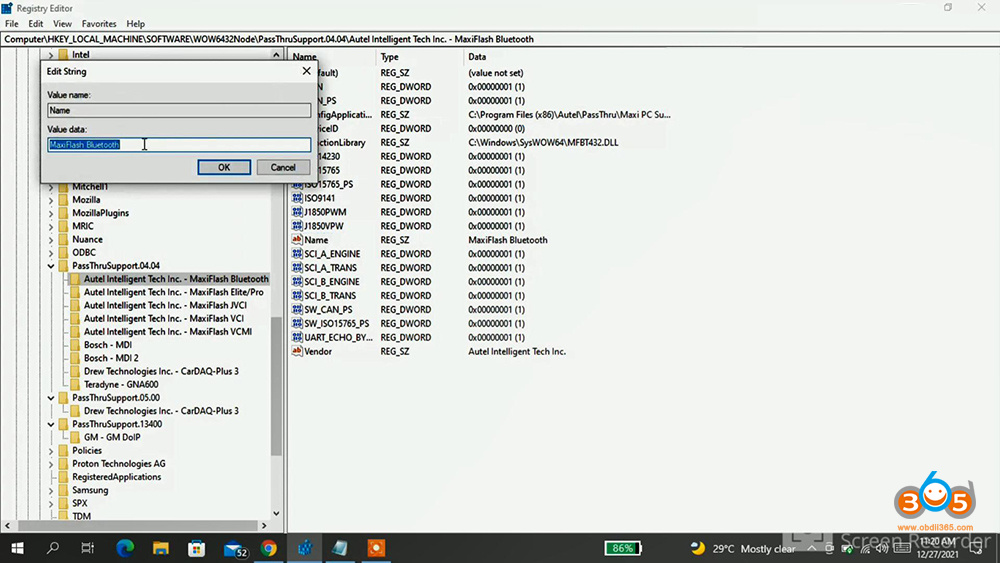 The moment I change it, it is being saved, so I go back, instead of it allows me to select my card, because the name has been changed to “MaxiFlash Bluetooth”. 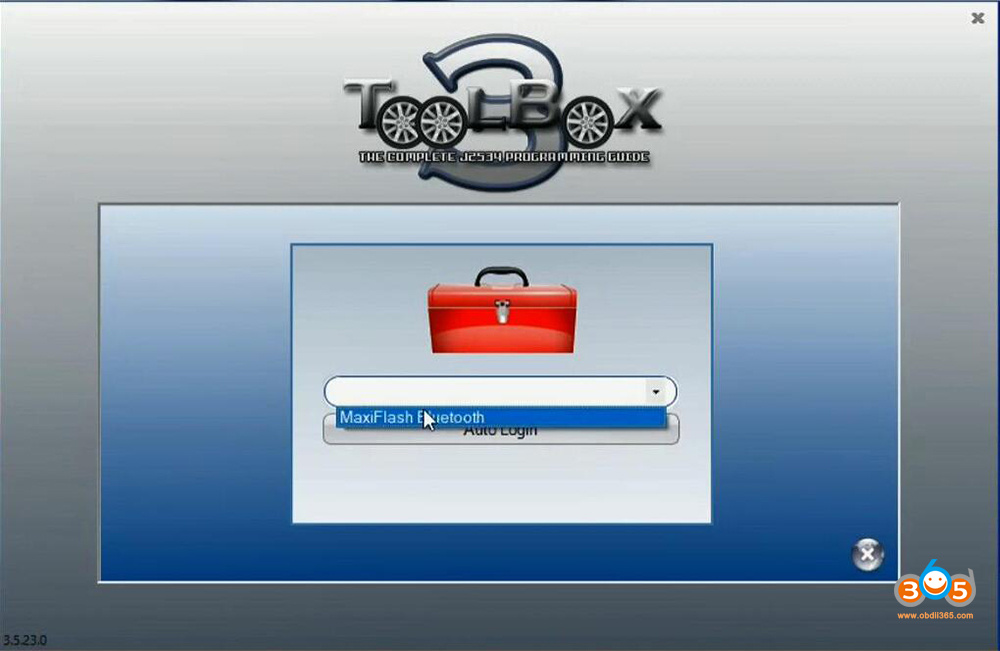 But when I try to log, they don’t support.

So that’s how you edit it, when you adjust it, it gives you the ability, so let me change the name to the previous name and go back. 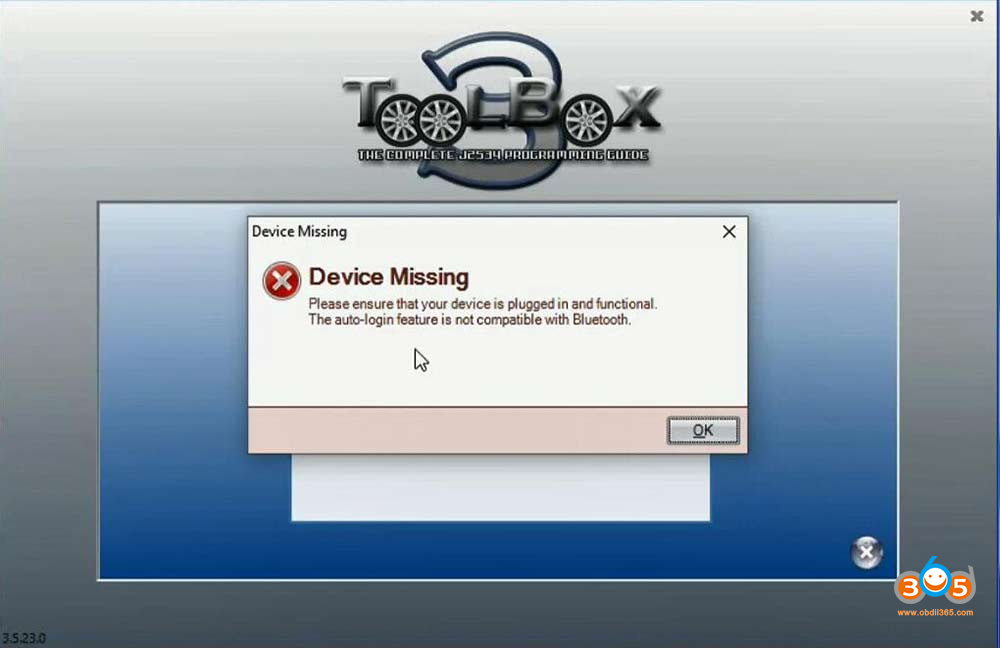 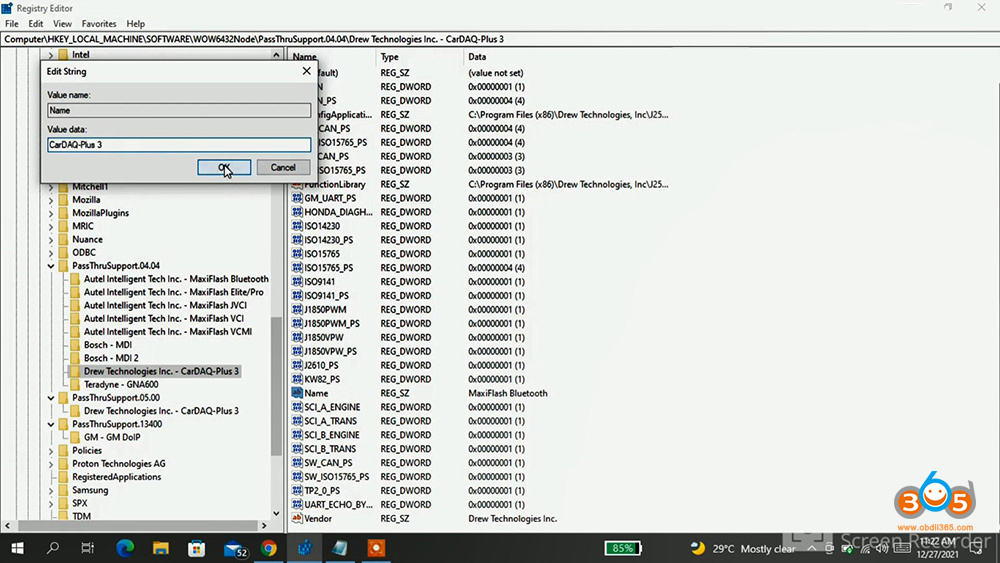 I do not have the CarDAQ plus 3 but I just wanted to install the drivers and for a demonstration purpose, so anytime I plug it in now if you see it CarDAQ plus 3 because that’s the name of the device, when I do the login and it doesn’t see the device, so when you edit it, and maybe let’s say I’m using the Autel MaxiFlash, let me try that one again.

Anytime my machine sees the name Maxiflash JVCI that means it’s going to connect to it with the software, and because the software is linked with the name, so let me go back to click it and wait for the software to load again.

Then you whenever I try to select it, you see MaxiFlash JVCI has come, so when I connected now I’m trying to search for the device, but I can see is telling me this device’s Bluetooth and it’s not compatible with Bluetooth devices.

So that means you can manipulate the software and other things to work out for you the way you like it. So I’ll take it back the original state.

And because I learned about this things, that’s how I go to use the device confidently because I know the kind of protocol it supports and I’ve used it to program most of GM vehicles and Ford vehicles. And it has been successful.

Just that I’ve not tried on the very old ones, but the normal ones, I’ve tried on it worked perfectly and it was able to program the vehicle for me or whenever you are using any software that requires the J2534 device, they will ask you to select all this list of J2534 devices in the software in the APN, so these are the APN in which the APN is the application performance interface, which your device communicates with the software of your laptop. 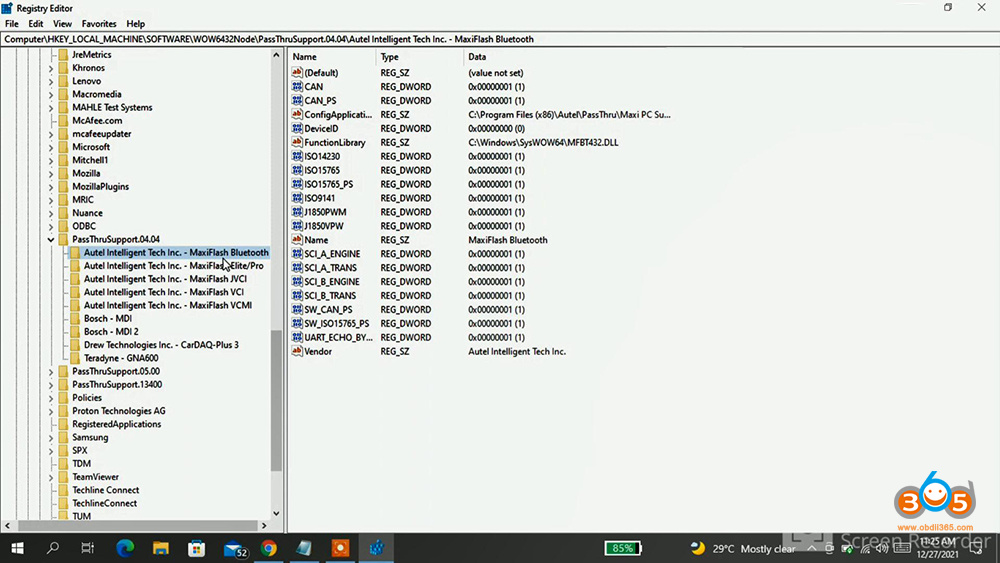 So, thank you for reading.