Are you initially set out to find a best scan tool that would read ABS, SRS, OBDII codes and more on GMC Sierra (as well as other GMs)? Check suggestions or experience below: 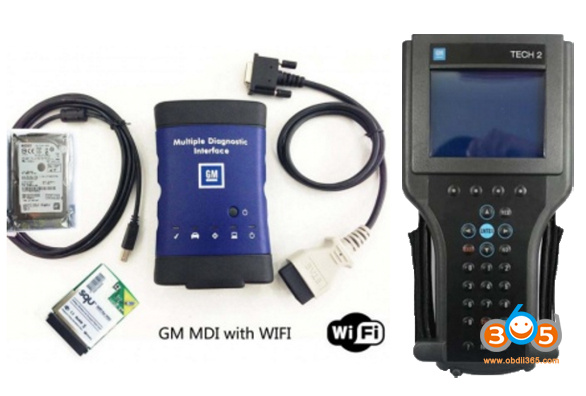 I use a Tech 2 clone for most things that require bi-directional commands on my T800, T400 and W Body Impala SS.

I have a WiFi MDI clone as well that should get me through around 2018 or 2019 Model year GM stuff. I use the WiFi MDI for programming using single VIN AC Delco TIS.

If you don’t have budget to get both Tech2 and MDI, go for vxdiag vcx nano gm instead. it has both Tech2win and GDS2 loaded.  The download side is Software requires a bit of playing around to install and get used to.

In my mind if you want to get serious about being able to fix your own GM vehicle the best bet is a China MDI. It can do everything a tech 2 can via tech2win. It can be used with GDS2 which is GM’s 2014 and newer diag software. It also can program modules via SPS. Everyone already has a laptop computer so I don’t count that in the total cost. That’s my thoughts on the subject but to be honest if it’s a 2015 or older vehicle and I don’t need to do programming I always use the modis. It’s faster and mobile. In my mind the situation dictates the tactics. Just like if I need to watch trans data, camshaft variance, misfire data, throttle position, and fueling info all once it is HPtuners time.

Downside: it can only do basic stuff. None of these are bi-directional control diagnostic tools that talk to proprietary controllers over the J1962 diag port like the Autel MK808. They’re code readers on steroids with Readiness and live data.

Snap-on
Snap on has the scanner game down to a science. The aftermarket has no choice. Normal retail for that same setup is almost $4500ish. The downside is the software subscription is stupid expensive. To the tune of around $2k a year I believe.

By itself, it only does the normal functions as a good quality handheld scanner, but easier to read as everything is not crammed onto a small screen forcing you to read everything seperate. With the enhanced package, it will access other than powertrain codes and allow you to operate individual components, and change/program settings much as the dealer can do. Naturally, the newer the vehicle the more it can access, especially 2006 and above.

Innova 3150
The Innova 3150 has the ability to read ABS and SRS system faults. 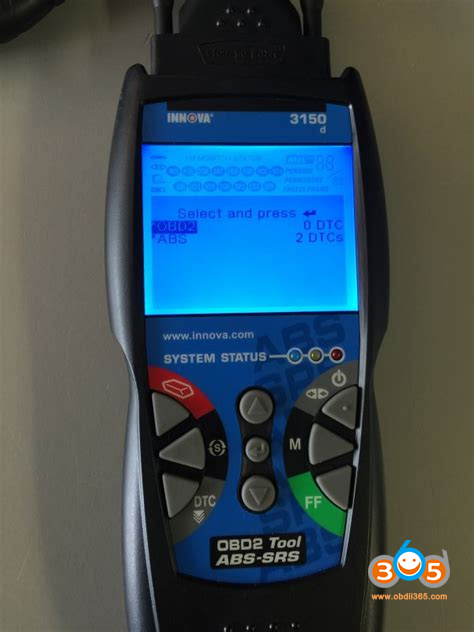 he pros:
1) It was able to read ABS codes and OBDII codes quickly on all my vehicles. A scan of ABS codes on my GMC produced a code C0265 I do have a EBCM problem.

2) It’s fairly intuitive to use without opening the manual and the scanner fits your hand well.

3) It has live data and can playback and graph the data.

4) it has the ability to test your battery and charging system. You can get the same thing done at your local auto parts store for free but it is a nice feature to have on a scanner.

5) Innova is based in California and their website is really good. You get the feel that the Innova website was built by people who think the way I do about how a website should be designed. Their user manuals (.pdf) are easy to find on the website and appear to have been well written by people who speak English. They can be easily contacted by phone, email and online chat. They also have an online resources page in their support section with lots of items, including videos, that would be helpful to new scan tool users like me. Although I didn’t use it the upgrade process of this scanner looks like it would be much easier than it was for the other scanners.

The cons:
1) This scanner didn’t come with any storage pouch like the other scanners did. That’s not really a big deal for a DIY guy like me but it does make you feel like you are using a scanner of lesser quality to not have a means of protecting it when it’s not in use. 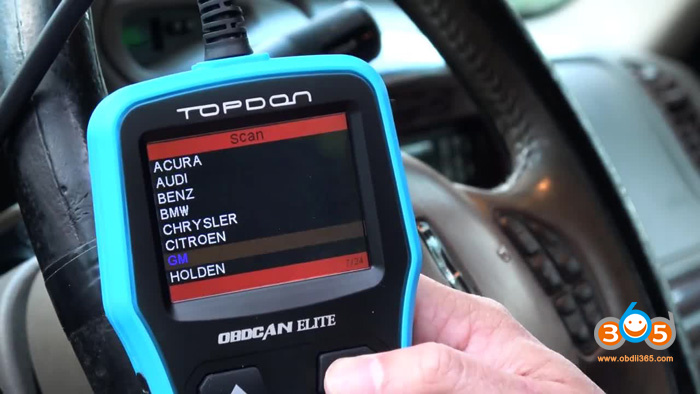 The pros:
1) The Topdon Elite comes with a really nice heavy canvas storeage case and a USB cable to connect it to you computer for updates (more about that later). The Topdon has a good heavy feel like a quality tool when you hold it in your hand and it has a long, permanently attached cord that allows you to sit in the car and hold it at eye level or you can stand beside the vehicle to use it without bending over. I liked that about it.

2) The Topdon was able to read the codes on all my vehicles. After spending considerable time learning the menu system on the Topdon it quickly found an ABS code C0265 (EBCM relay circuit) on my GMC.

3) The Topdon can display “Live Data” in the form of text or a graph. I think that would be very helpful when troubleshooting and intermittent problem.

The cons:
1) When scanning the Equinox the Topdon would just sit there and say “Please Wait” and I thought it had locked up. It wouldn’t respond to pressing any of the buttons so I would disconnect it and start over. Once while scanning the Equinox for OBDII codes the phone rang while it was saying “Please Wait”. When I came back from talking on the phone that scan had completed and it reported no codes were found. It was way too slow but it did work on more attempts if I gave it ample time to complete the scan.

2) I found the menu on the screen hard to read unless you were viewing it in ideal lighting conditions and were holding the screen at the proper angle.

3) I found it almost impossible to update this scan tool. You have to go to the Topdon website which seems to me to be poorly designed. I found the process of updating the software for the scan tool to be a nightmare, (I believe it is very important to be able to easily keep the scan tool up to date). You have to go through a registration process to download software to your computer, download the software which took forever, and then go through a process to register your scanner. Then you try to update the scanner with it connected to your computer with the USB cable. None if it was very intuitive and it wasted a lot of my time trying to get it to work. 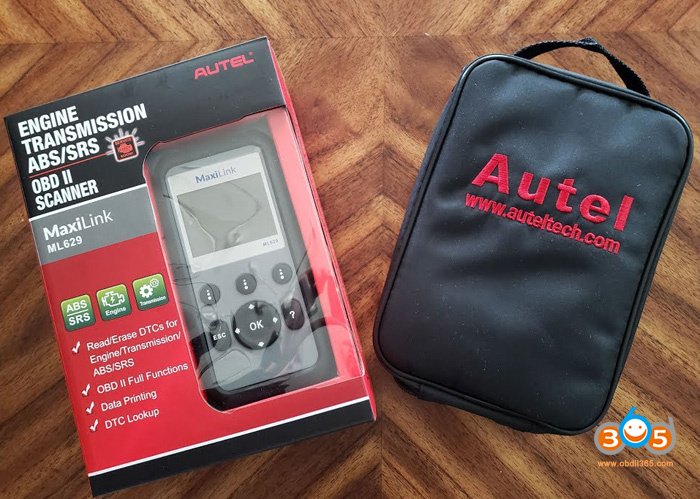 It is the advanced version of the ML619 scanner. It can scan ABS, SRS, and it can do transmission/engine diagnosis. as well as Auto VIN.

The pros:
1) It comes with a nice storage case and a long cord that is detachable. That would be a good feature for someone who used the scanner a lot and the cord gets damaged of frayed. You could replace the cord without scrapping the scanner.

2) The scanner is large and had a professional feel to it. It felt like holding a large cellphone that had lots of rubber padding around it prevent it from getting damaged. The buttons have a good feel and the layout of the buttons make since the way they are located on the device. The screen is really clear and populated with icons instead of text that makes it really easy to use.

3) It worked great on my 2012 Equinox and my daughter’s 2009 Camry and it was fast. It told me more than I would ever what to know and it had lots of great live data features including graphing. It displayed the information in a way that was better than any of the other scanners I tested and accessing that information was easier than with the other scanners.

The cons:
1) This is not a big deal but when this scanner is doing a scan for codes it does weird (and a little scary) things to the instrument panel. All the gauges go crazy and the clock is reset to 1:00. You hear all kinds of noises coming from under the dash. I guess it is testing all the HVAC sensors and actuators.

2) Although it would read OBDII codes just fine, it would not read ABS or SRS codes on my 1999 S10 Blazer or my 2001 GMC both of which have the 4.3 V6. When you try to read ABS and SRS codes the scanners typically ask you to select the fifth digit of your VIN from a list. The fifth digit of the VIN for my GMC and Blazer were missing from the list on this scanner. After searching forever on the Autel website for a compatibility listing for my vehicles I found my Blazer and GMC were not compatible for reading ABS and SRS codes.

Pros:
1) I’m pretty impressed with it although it does have some pitfalls. It does feel a little cheap for a tool that does all it is capable of.
2) It does come with a heavy duty detachable, and I assume replaceable, cable that is about 5 feet long. That is great because it allows you to be able to hold it so you can see it from under the hood of your vehicle if needed. The cheaper scan tools usually come with a cable about half that long that are permanently attached. And it does have a good, heavy duty, case that closes securely with sliding latches that should last a long time.
3) It was able to show live data on all of them for OBD and ABS. It can perform several tests and operations on the ABS motor and valves in the ABS unit. It can also read and reset air bag codes
4). It was able to do the ABS brake bleed procedure on my ’99 Blazer and my 2001 Sierra.

1). it isn’t very intuitive to use and the screen can be really hard to read in the sunlight.

2). After giving up on the keyboard to enter the VIN for the Blazer I discovered you can manually enter it using a menu system that you go through to find your vehicle. It is quite cumbersome to use but it does work better than trying to enter the VIN with the keyboard.

3). Updating the tool is a little clunky but it did work by following the instructions provided. You have to download and install the FoxAssist software on your computer and then do a simple registration that requires an email address but surprisingly it didn’t ask for a name or other personal information.

To sum it up, MDI is best option for deep diagnosis and programming, Innova best and easier to read and clear codes, Foxwell does work as advertised and does more than a cheap code reader.