This is a common issue in Mazda smart key system. Sometimes dashboard will show a red light (keyless system ‘Keyless Entry Malfunction’ error) but the keys are working properly. 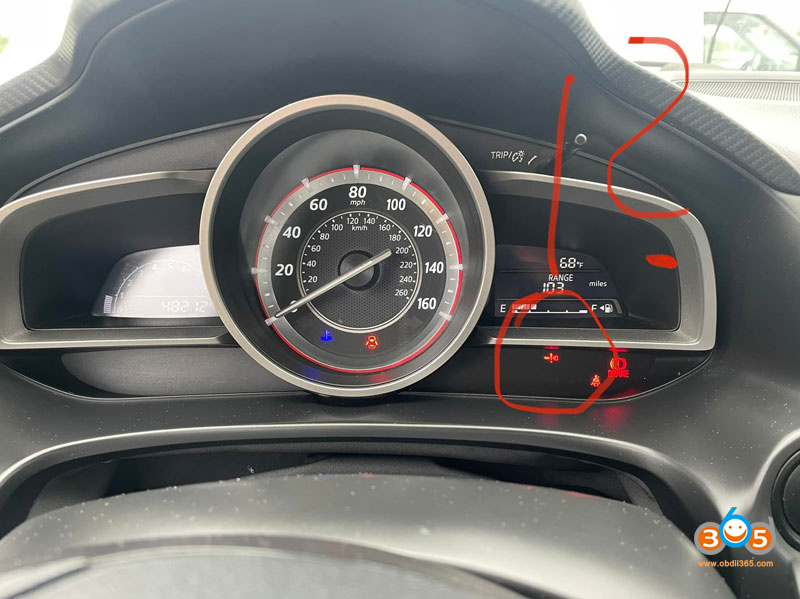 The FCC ID of the key is not the corresponding one of the vehicle that is why you get the red key indicator.
The buttons and fcc and ic numbers have to match, even the buttons.
Mazda needs the original key ONLY. Sometimes if you want to add not original key (like vvdi and keydiy) this error will be on computer or dashboard.

Need two original Mazda remotes, done by all key lost.  Delete keys and program 2x genuine remotes and the errors will go by itself the error.
Do always use OEM keys for Mazda push start vehicles.
2)
Xhorse adds Mazda ID49 smart key light repair function.  Use this option then do akl on car procedure and malfunction will be deleted.
Some users solved the problem and did the following:
I generated again the key via vvdi mini key tool and chose a two-button model as well as the factory one ( in the first attempt I chose a model with 3 buttons and the third button for the trunk worked. ) after that I went to the special functions Mazda id49 smart key light repair read the factory and loaded on xhorse smart key started i procedure all keys lost deleted all keys and added them again and the error is gone.

They must be OEM keys.