One customer got a 2016 Nissan Rogue that needs a PCM, unfortunately he got a used PCM, because there are no new ones available and the farther away new ones he could find are over 210 hundred dollars. I might have quoted all that wrong I don’t know, I remember there were a ton of money he said the only one he could get and wait on was a ton of money so he got a used PCM attempted to program it. He can’t get the keys to finish and the VIN won’t change, he tried every tool he’s got. Everything from nerves to Autels to Launches all kinds of stuff couldn’t get it to go well, this is actually a pretty common problem, because starting in 2013 most of the Nissans that are 20-digit rolling code which started with the altima and by I think 2014 or 2015 the rogue and a bunch of others. They basically became a one-time vin right, not even console will work and we’re actually gonna attempt it with console, but just to show you but I’m pretty sure it’s not going to go, so we need to do two things: one the calibration in this PCM is incorrect, so it’s actually for a California emissions vehicle is what the actual vehicle is but the one that’s got is just a North America 50 state legal, I believe there’s a transmission difference, the one he’s got is off of a 17 but the hardware is correct.

So we do have to change the software and we have to do the vin, so we’re going to go through the VIN first, which is actually very simple, it just takes some tooling and equipment, and then doing the calibration changes significantly more involved because neither of these things can you do with the Nissan scan tool or even do them out of the box with almost anything else, we’re gonna do quite a bit of editing. So to squash a bunch of questions right off the BAT, it’s what am I using well this is Godiag GT100 breakout box and a bench flashing unit, so it’s got a cable that outputs a bunch of b plus ignition switch ground can line all that stuff connected to the breakout box.

So it allows us to use this harness to connect to the PCM to boot on the bench, now, it also comes with OBD2 cable coming out of it, so we can hook our Nissan scan tool which we’re using the console VI here and then it gives you an additional plug-in on this end to plug into the vehicle side, now you could just not use this harness that connects to the PCM and not plug it into the all and power up the unit and just plug this into the PCM.
Or this end into the car and this end into your scan tool and have a breakout box you could scope each of the pins on the D L C, so that’s two tools in one really. 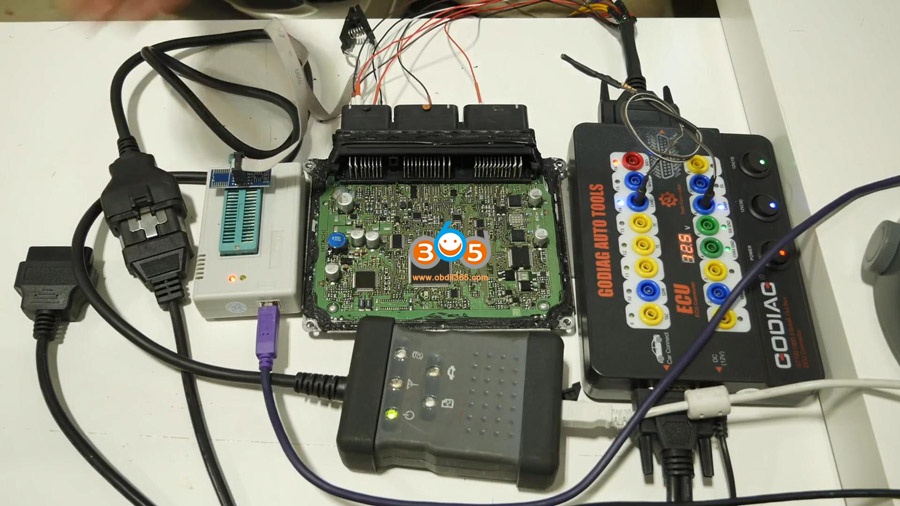 So we’re using that and then to do the vin change. This PCM so we can talk to the computer and do the flash and then we’re going to use the mini Pro eeprom tool, one of my favorite prom tools. So basically the first thing we had to do was identify which eeprom on the circuit board is the one that houses the vin, the SOIC8 small chip connectors quite a few connection types that come with the mini Pro so we’ll go ahead and what we’re gonna do is actually take a look at this hooked up to Consult VI (original not a Consult 3 plus clone), we’re going to attempt to change the vin number with Consult just to show you guys what’s going on.

Click “start”, go ahead and copy this onto our clipboard so you can see the vin numbers incorrect right, this is actually for a 2017 model, so we’re gonna go ahead and paste that in there and this is where you would normally just click “start “and it says the operation stop due to the following test conditions, he tried with tons of tools, it’s just it’s not going to work, so this is the incorrect vin number in consult VI, and this is the correct vin number in the notepad. 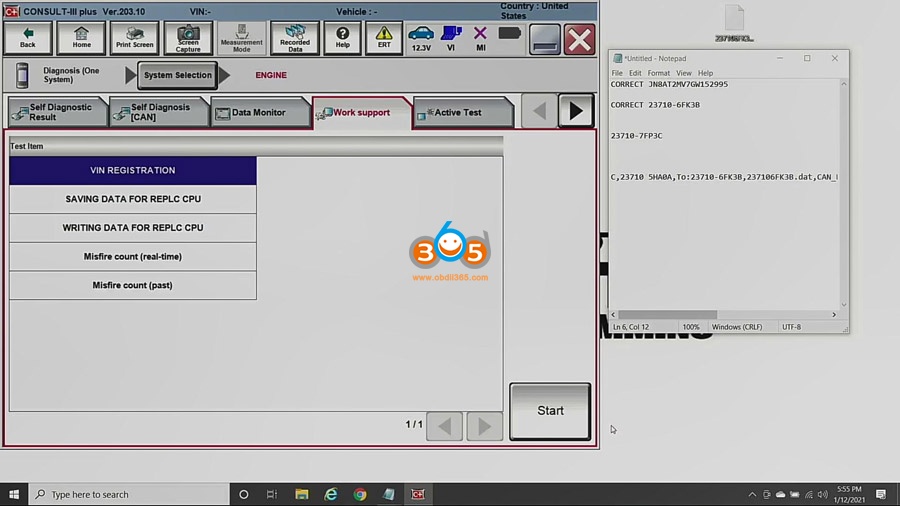 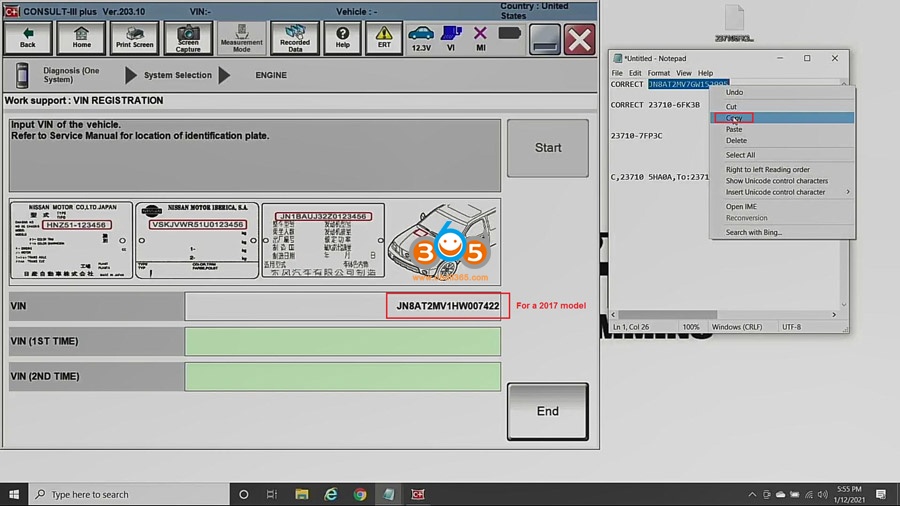 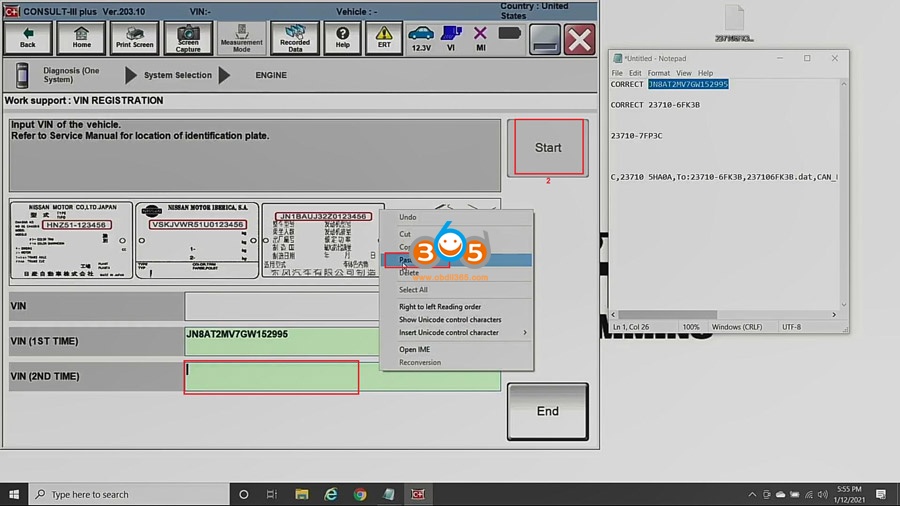 So, here’s how we’re going to fix this.
Okay, we got that saved on our desktop, so that way we have a backup of this Bin file, now if we pull up some data here, we can see this is our correct vin and we see this is a VIN number, that’s in here, so we’re gonna go ahead and change that. 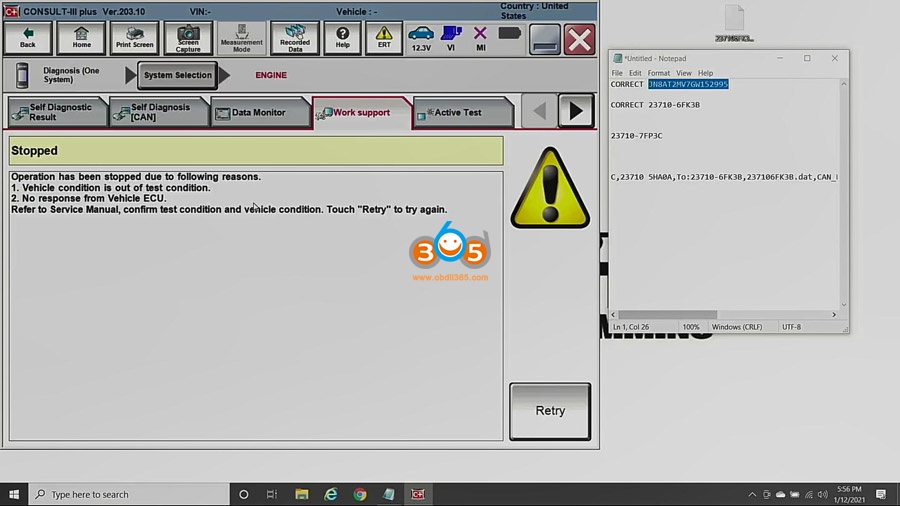 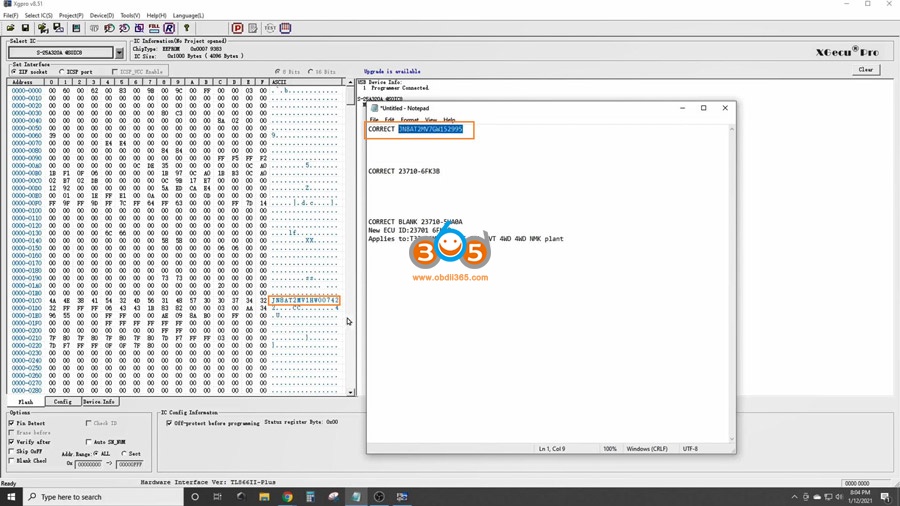 Alright and in this particular S25832, the vin is only stored in one location in it so we’re actually going to go ahead and write this.
Again make sure that you had the original backed up so we’re gonna click program and it says program successful. 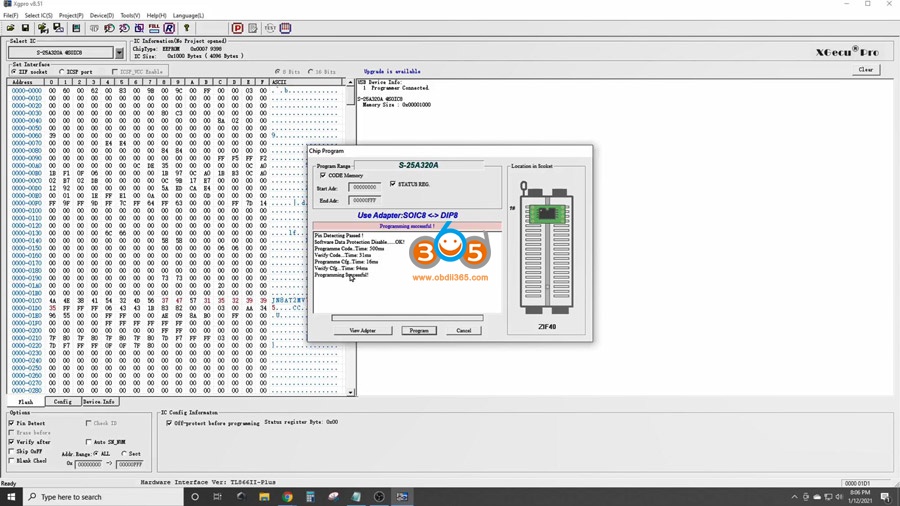 And we’re going to turn on Godiag GT100 breakout box.
Our unit back on to boot, this backup. 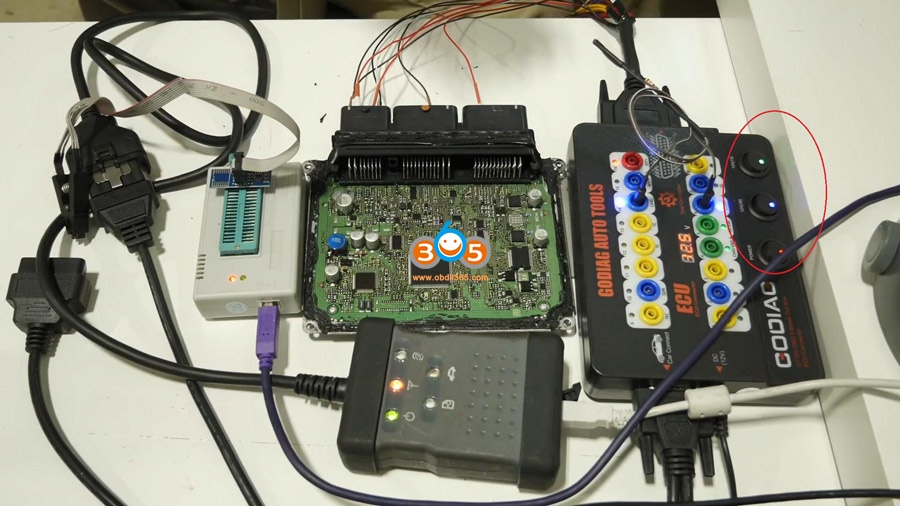 Let’s switch back over to the scan tool here alright we got some so we did get the message and exit off of that. 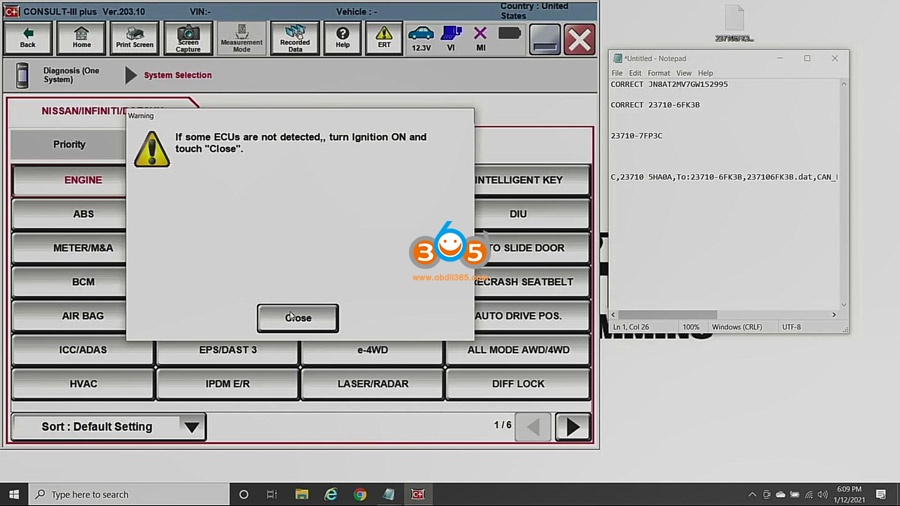 Go back over to “Work support”, go to vin registration, click “start”. 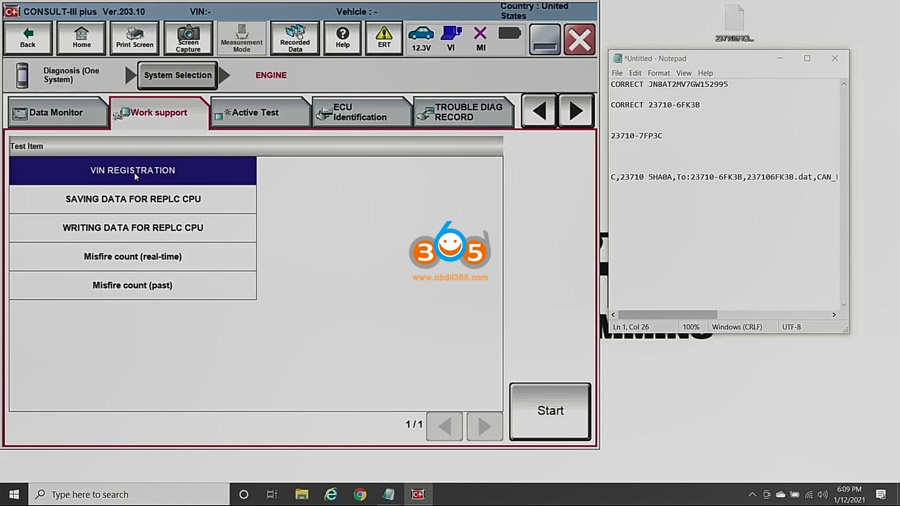 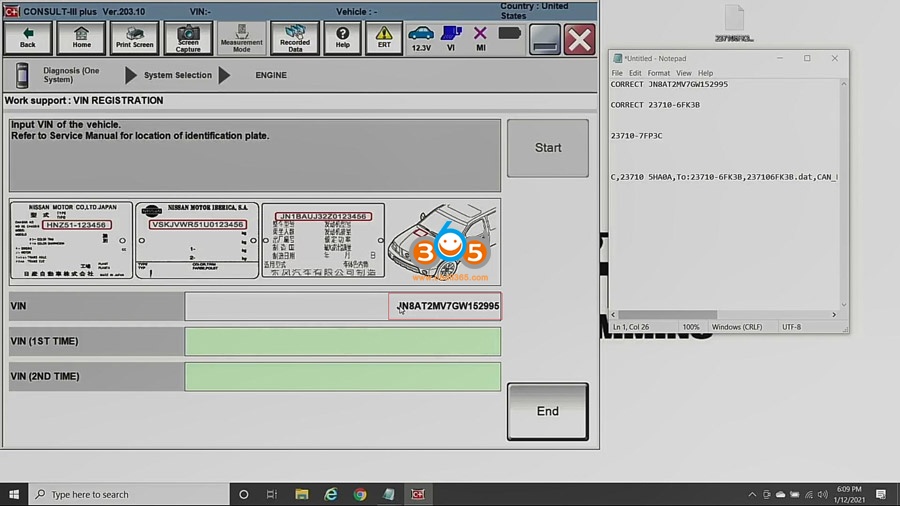 Our next problem is that this has the wrong flash, so it has the 7fp3 Charlie it needs to be 6fk3 bravo. 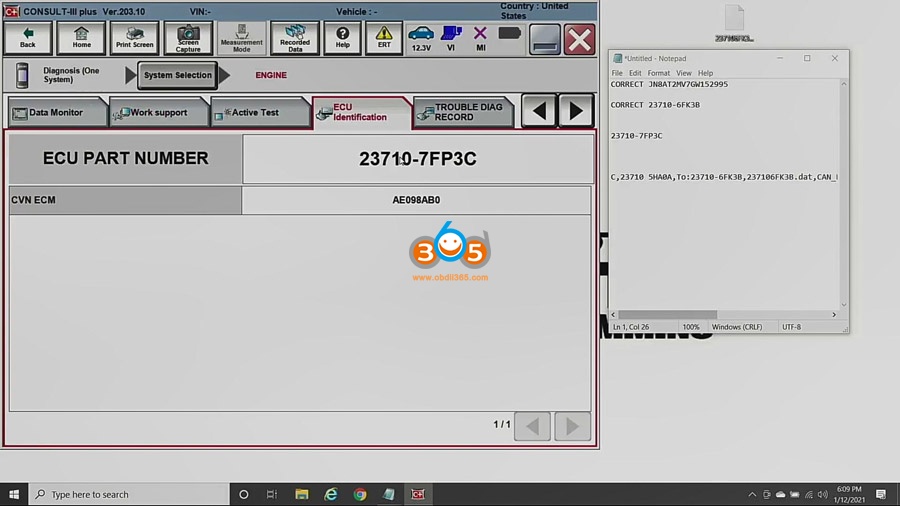 And basically this is what it’s saying, so we’re going to click on “save” to save this operation that this is the vin number, we’re doing reprogramming for the engine module, it’s currently got this part number, this is the vehicle, this is the VIN, this is the time and date will click “save”. 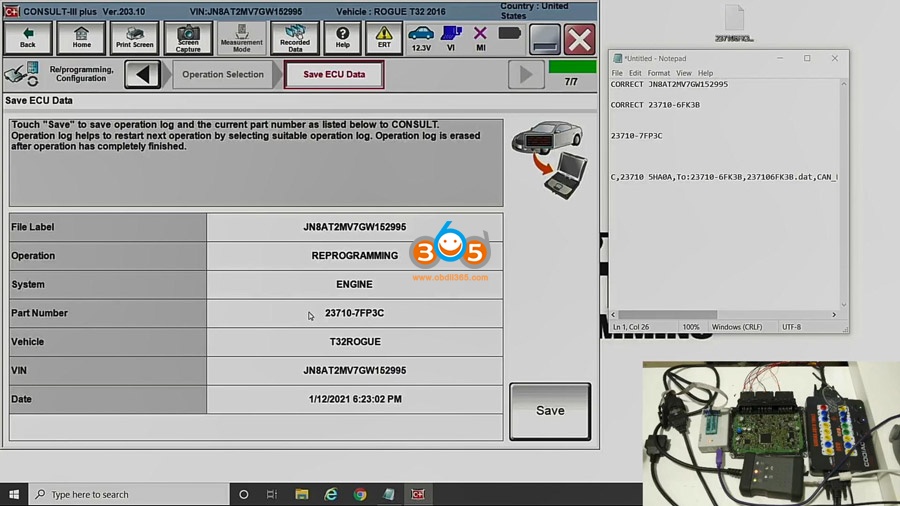 We’re going to make sure we carefully read all the instructions, click “next”. 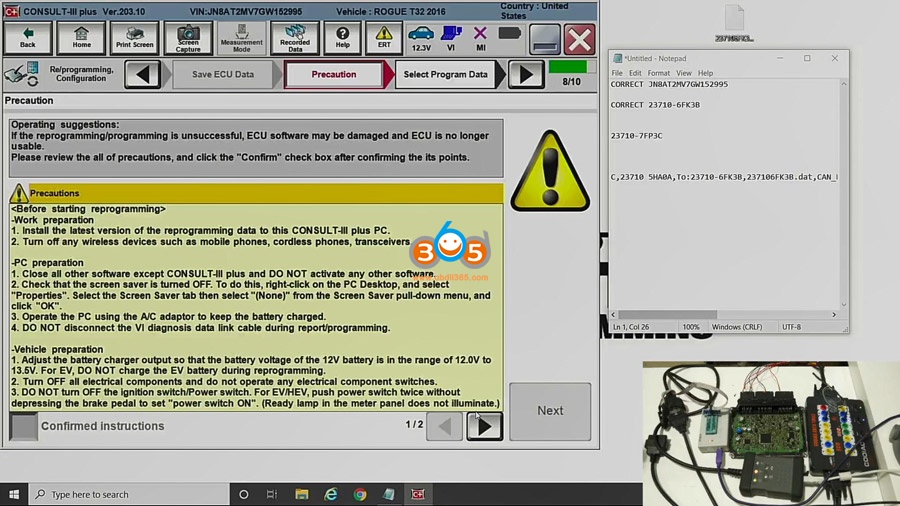 And it’s going to say hey, your current part number is a 237107FP3C and we’re going to turn it into a 21710 6FK3B, look at that that’s correct. It’s for a Rogue T32 chassis with this vin number for the engine, and this is the other information on this, the T3216_L1_Auto_Flash,it’s going to take about ten minutes.

So we edited that there we edited it to this that it’s got this current part number and it’s going to this one, this would not have happened if we did not edit that csv when we went to go do this, if we had the file, it would have been that 6fk8 Alpha or whatever it said on the Nissan Tech info website but that’s not the case, we made our edits so we’re able to flash this wrong file to the correct file, even though these are not compatible vehicles. 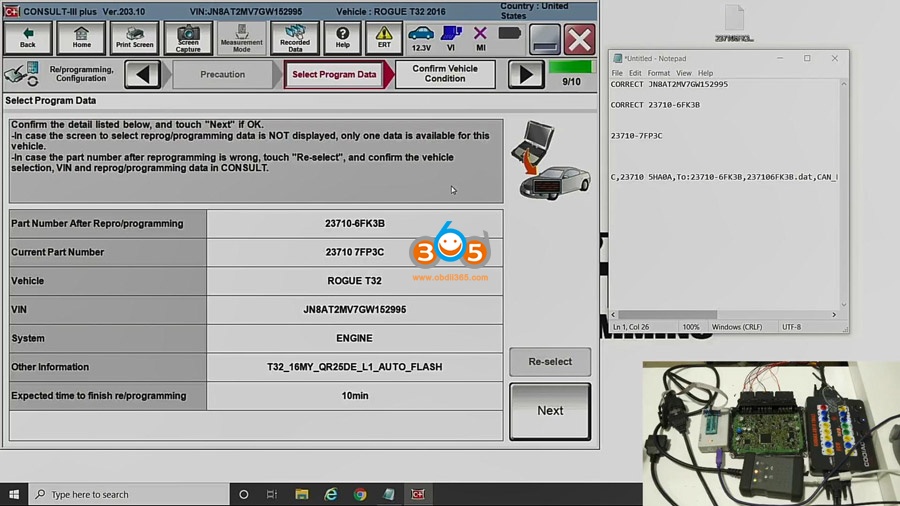 So go ahead and click “next” it’s going to check for a network connection and I’m going to have to log into tweedle here.
Once the twitter login comes up. Go and select your market.
And then what it’s doing here in the first bar is transferring the flash file from the PC to the Consult VI over here.

Alright so it says the reprogramming is complete, so we’re going to press next. 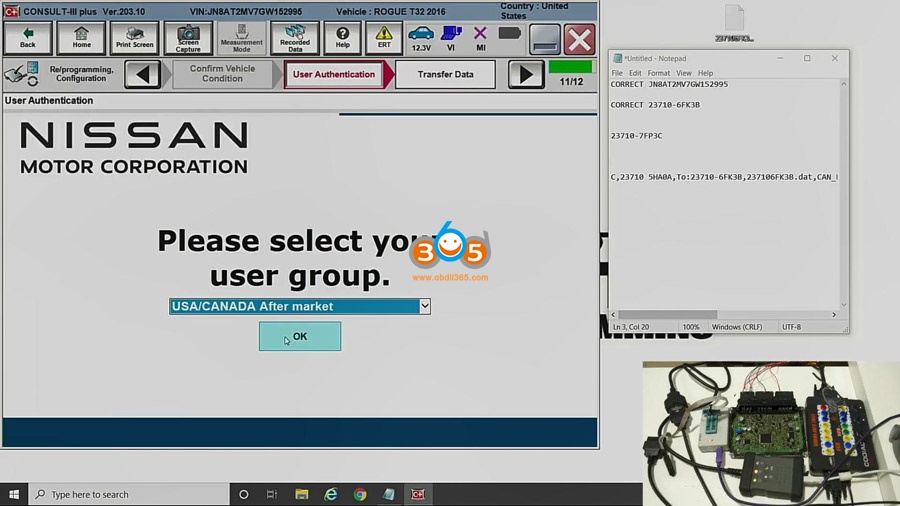 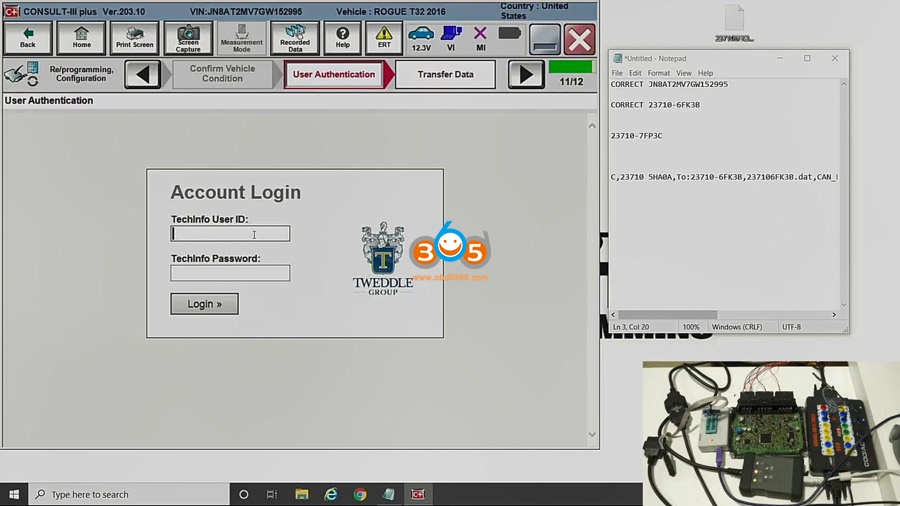 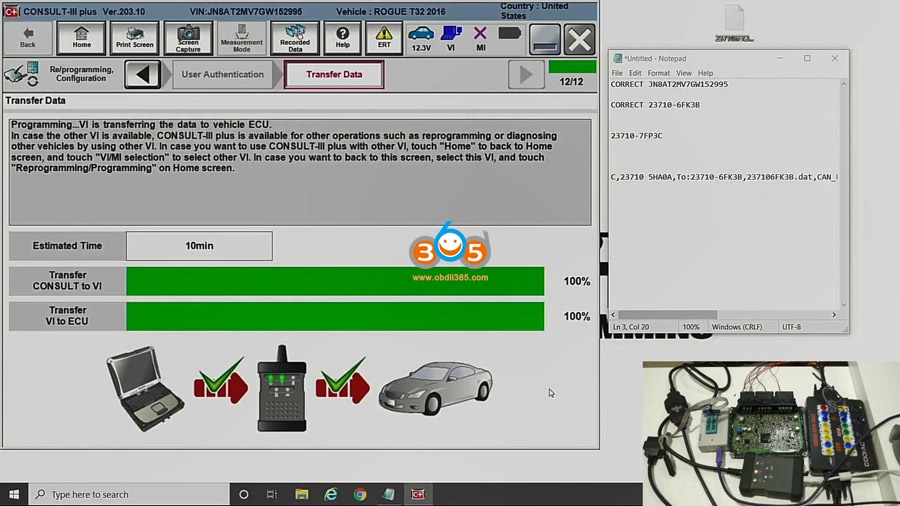 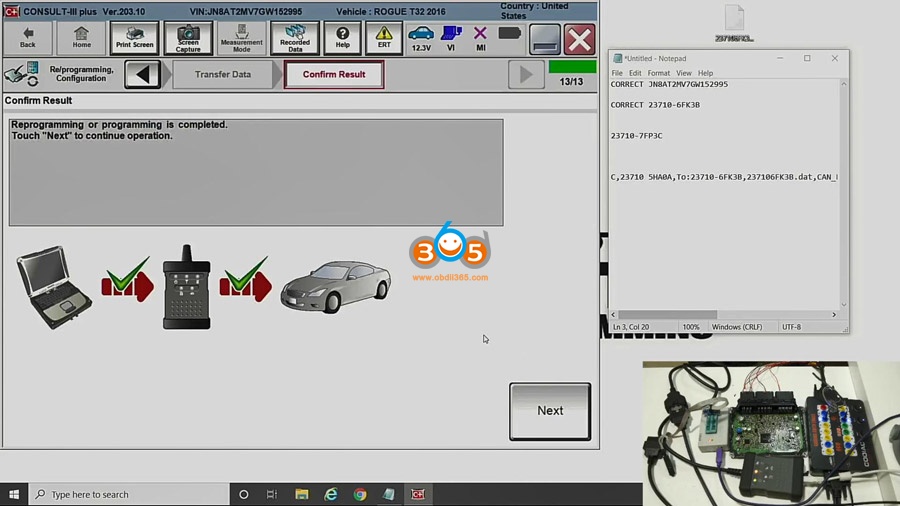 It’s going to just do a system cal Performing, and it may have us do a few other things.
Go back to diagnosis of one system, go back to engine.
Tell us some are not detected, we know that.
Logs in, it’s got a bunch of codes, we know that.
A couple things we’ll go over to our work support.
Make sure we have our proper 299995295 we do go over to our ECU identification and look at 6FK3B bravo. 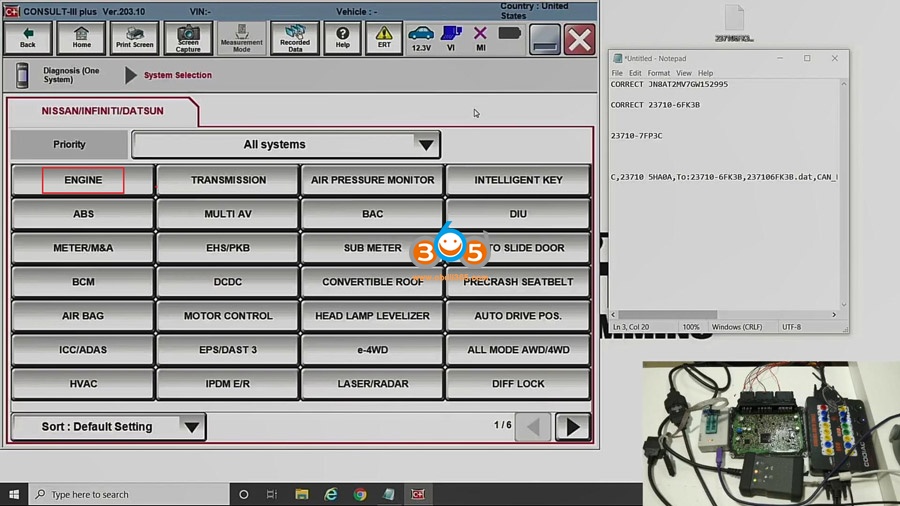 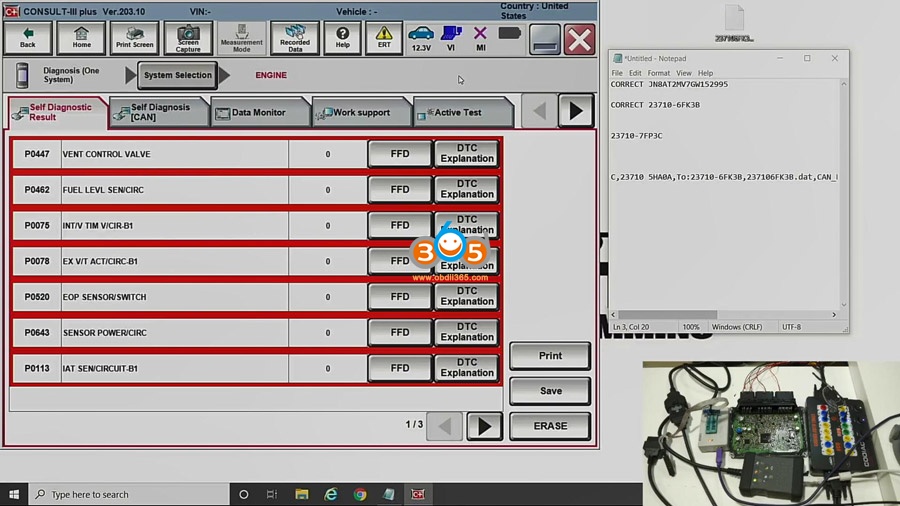 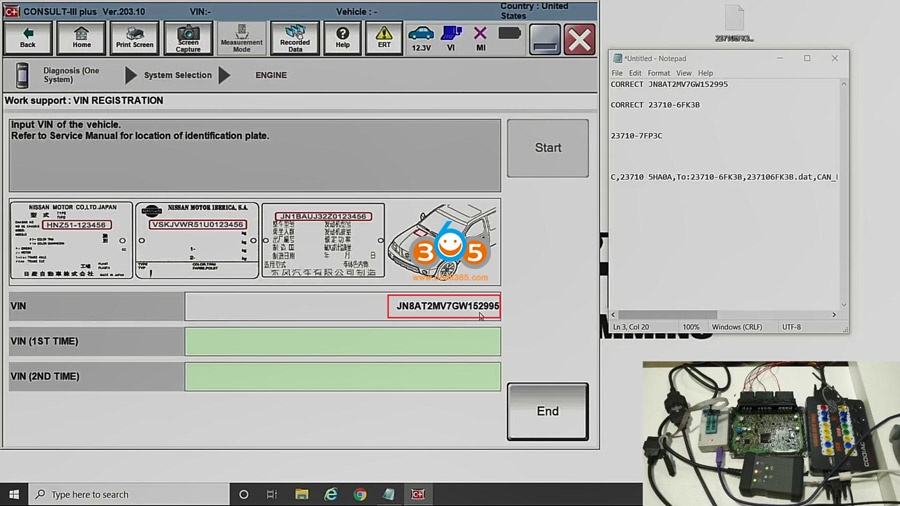 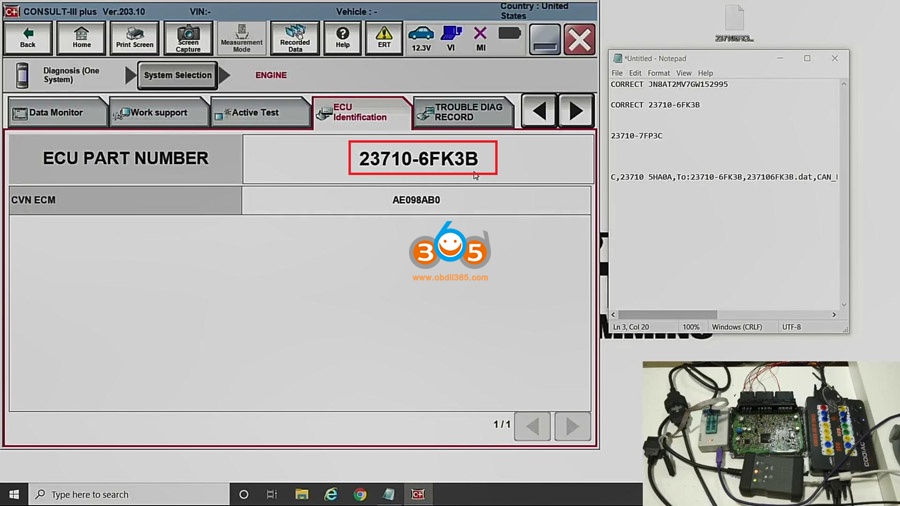 Thanks guys for reading.