I picked up an AK90+ and began the usual task of scraping the board coating off the 2L86D chip.  It can read the key but cannot read the EWS.

Have any of you guys ever had any trouble reading EWS 3 with the AK90? I cleaned the pins properly and also pry out the pins on the connect but still get “pin no touch” error. Will the K-Line adaptor make a difference?

I’ve tried a few different packages, removed the software and the silicone drivers, rebooted my computers in between, plugged the unit in, then installed the software, tried turning the chip cable connection each direction and tried a minimum of 20 reads each direction with varying levels of pressure on the main chip, pulled the pins on the reader out a bit thinking they were pressed in too far (on the cable), just about everything.  All I get is still “pin no touch”. Any idea? 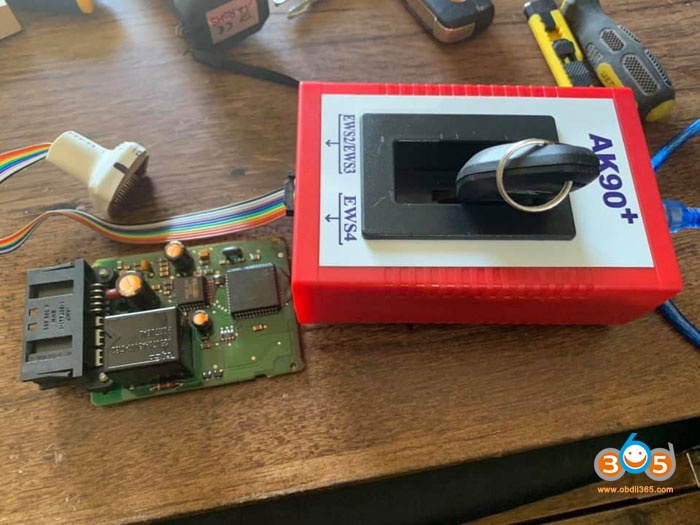 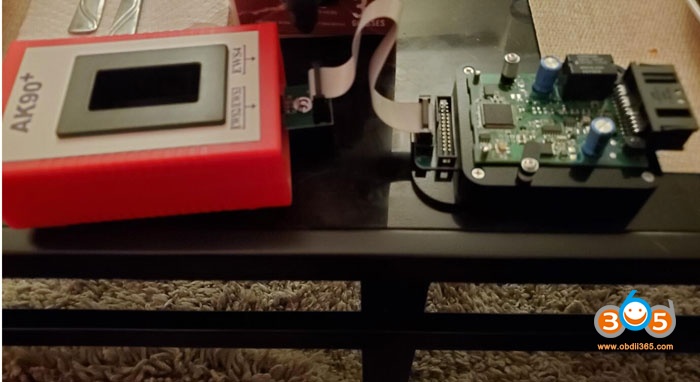 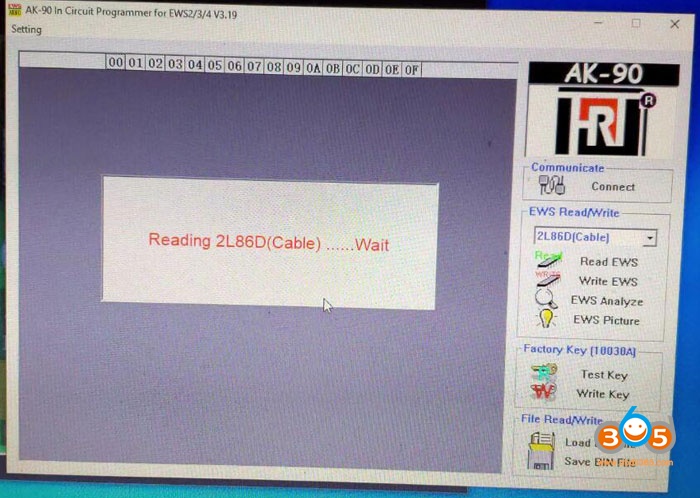 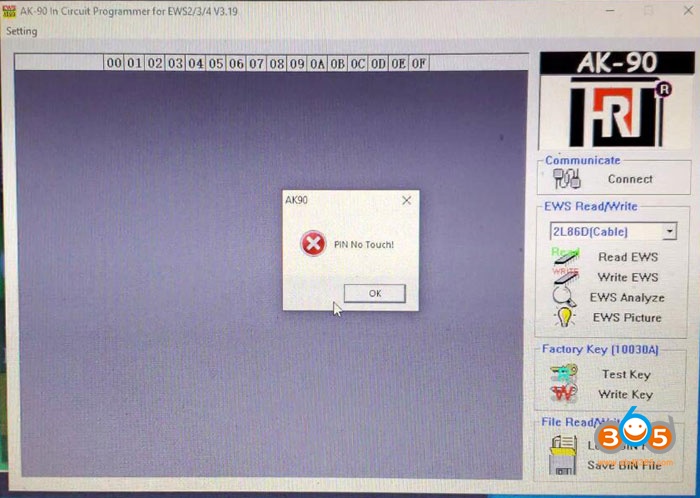 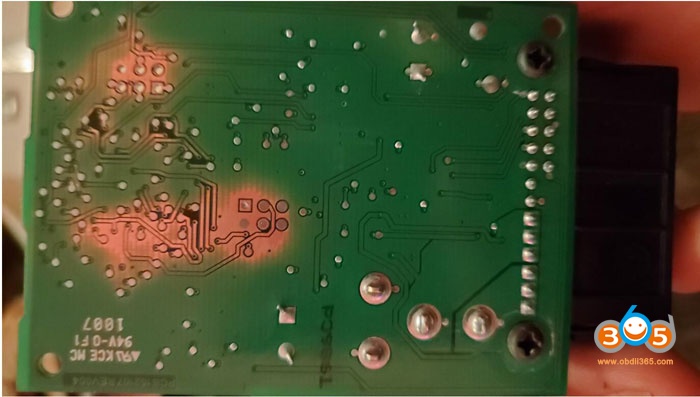 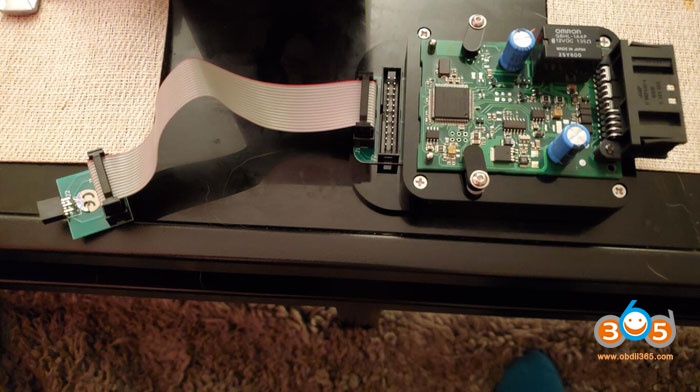 If you have the ‘Pin no touch’ error, that means that the program is communicating with the AK90 properly. You can verify that by seeing if the AK90 can read a key.

The problem is likely that pins haven’t been cleaned where the socket contacts them (or you have selected the wrong module version, or have the orientation wrong, or the cable isn’t plugged in).
Seems like some people get it to work easily and others have to fight it to the death.
Here obdii365.com engineer provides some possible solutions. If one doesn’t work, try another instead.
1).
Best to uninstall everything if the unit wasn’t plugged in before install the first time. There’s no down side and it only takes a minute.
Go to add remove programs in the control panel and browse there by installation date. That way you won’t miss anything.
Uninstall anything called Silicone. Then reinstall the software, but be sure to have the AK90 plugged in before you start installing the software. That is important. You must get the drivers all Uninstalled before you reinstall them properly with the unit plugged in. Also, you have to rotate the plug 90° counter clockwise. The arrow and the dot did not match up.
2).
Worked.
I had to remove all the software including the drivers with add/remove programs. Anything to do with it, anything named silicon I think it was. Then I plugged the AK 90 in to the one port that worked and then reloaded the software from the disk with the AK90 key programmer plugged in. Then followed the instructions to right click on the new desktop icon and load the drivers. Then I had to try the cable in all 4 directions and the dot and arrow did not line up, but on the 4th direction try it worked to read the ews.
3).
Worked.
When I had that issue, all I had to do was rotate the ak90 connector.
4).

I went through two AK90+, a K-Line adapter, and multiple laptops while continuously getting a pin no touch error. The only thing that worked for me was scrapping the chip on my spare EWS module like it owed me money (I literally had metal shavings on my desk afterword) and applying moderate pressure to the connector while it read and wrote the chip. Obviously I’m not brave enough to do this again to my stock module, but that was what it took for me.

From what I observed while messing with my EWS modules is that if the connector is incorrectly oriented or not fully seated it will fault with the Pin No Touch almost instantly, however if it’s on correctly but isn’t getting enough pressure it will take a few seconds to fault out. Once I got it not immediately faulting I just kept putting more and more pressure pushing down the connector until it worked. Again, not something I’m comfortable with repeating on my stock module, but that’s what it took to get the spare to work and reprogrammed.

Worked like a champ. I did have to use version 3.02. I also had to push the connector down on the chip while it read and write. Had to hold the transponder with my fingers. If it says pin no touch make sure the connections are clean (i used a sharp knife) and push down on the connector.

Pull the white shrinking tube from the connector. Look for two PCB tracks that go to the outer pins. They are close to each other. This should be your right “top” and should match the dot of the Chip. Also push the connector all the time onto the chip. 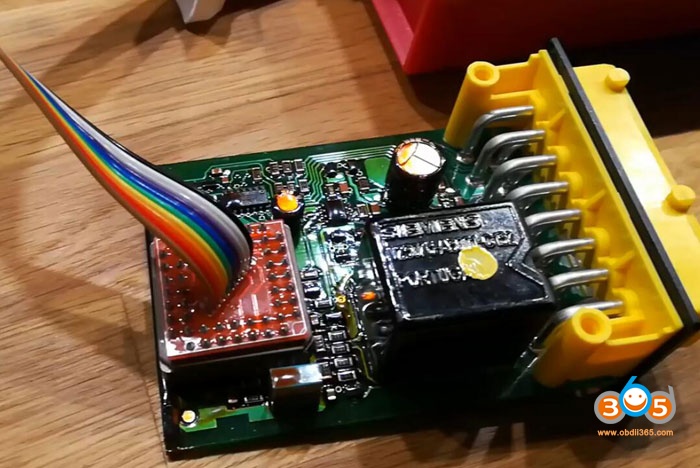 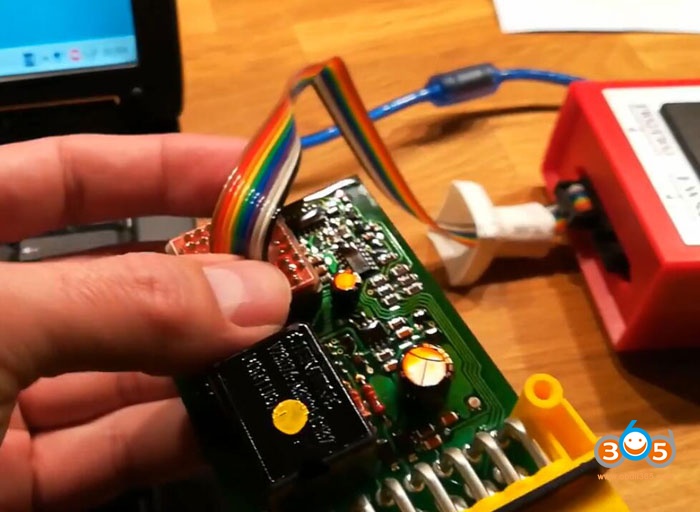 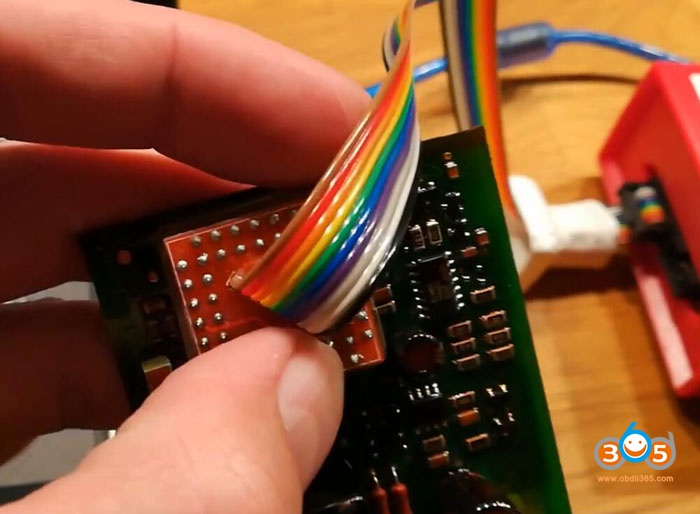 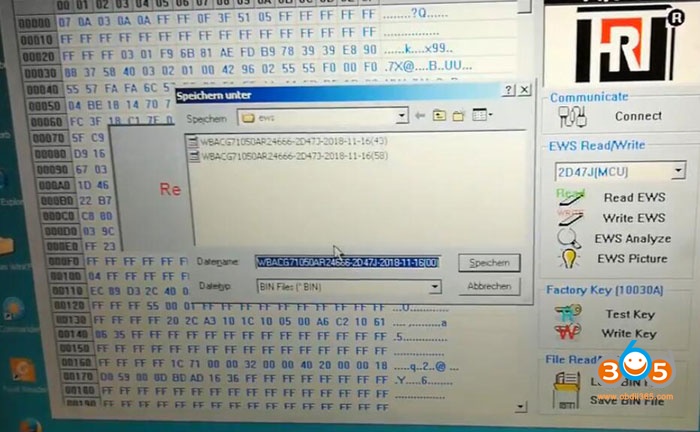 Press the adapter onto the chip and keep it pressed. Then read.  Did that for about an hour eventually it worked and keep trying.

I always have this problem. You have to push down chip really really hard, even with both hands.

Put pressure on the clip when reading.

Press and hold connector (put pressure on the chip) seems to be the method with the highest success rate.

Here’re pictorial guides to help you understand the process better:

How to Modify AK90+ Key Programmer to Make it Reliable?