A 2005 Silverado LS 2500HD: Nothing like the quality of OEM for sure! Swapping out to new headlights and turns really help keep it looking nice and certainly fits the rest of the truck nice. The tires do look good in that pictures…I think they were just dirty in the garage shot that you posted.

I like the improved looks. Far more important is the fact that now I can see the road at night.

Night picture in barn light. Bad time to take it. Looks better in the sun.

The MIL illuminated Monday.
Torque Pro shows Code P0446
–P0446 is triggered when the ECM has detected a short in the circuitry to activate the vent control valve or the EVAP system failed to maintain the vacuum during the active EVAP leakdown test.
No shorts in the wiring folks.

Plugged in the GM Tech 2 scanner clone and ran some Evap tests.
-Both Purge and Vent solenoids made substantial clicks when I commanded them on and off. This put them on the back burner.
-When I closed the vent and opened the purge valve 20% I heard a sucking noise from the filler door and the tank pressure sensor noted ZERO change… Dead Steady at 6.6in Hg.
Okey Dokey. Off to O’Riley for a Stant filler cap to replace the knackered cap on the fill pipe.
New filler cap installed. Cleared the DTC codes. MIL re-illuminated on the way home. *** is going on here…
OK… Peeling the Onion…
-GM Tech2 still shows 6.6in Hg no matter what the state of the EVAP valves. No sucking noise from the filler neck anymore so the cap really was worn out. I can now make the engine stumble from vacuum being pulled on the tank with the purge open and vent closed… The pressure sensor is reading rock steady at 6.6in Hg.
-Change the EVAP tank pressure sensor with a brand new GM sensor from the dealer in Wells River… Don’t trust China made crap and this sensor is in a really unpleasant location.
Tip for anyone doing this sensor. It’s just like a MAP sensor. The tank pressure sensor is press fit through the top of the sender but there was no need to drop the tank or lift the bed… at least on my 2005 extended cab 2500 HD. I could access and change this sensor by feel reaching up between the frame and the bed side. I made sure there was no crud on top to drop in the tank and kill the fuel pump. A backpack blower with an elbow would’ve made quick work of any loose dirt.

New sensor shows negative tank pressure values, indicating vacuum, when the purge valve is open and the vent valve is closed. No sucking from the filler and the Tech 2 now aborts the test when the vacuum reaches a low enough point. It shows 0.00in Hg with no commands to the Evap solenoid valves. No more MIL? It won’t run an Evap test with the engine temps up but I’d say it’s fixed.

The GM dealer had some 88959495 & 88959500 molded mud flaps collecting dust on the shelf for an OK price. So I picked em up.
No more sandblasting the rockers and bed corners.

Swapped the K&N Air Raid Cone filter back to the stock K43 air cleaner.
My first Blackstone UOA showed much more silica than I would like to see.

Can anyone post a clear high res picture of a 2005 California Emissions air cleaner sticker for a 2500HD with a 6.0L engine? My air cleaner box is off a 5.3L so the emissions sticker is wrong.

I have a K&N Air Raid setup for the GMT800 chassis that I don’t want or need. I’ll post it in the For Sale Section.

Question: Nicely done. Do you have the full blown tech2 that costs a few grand? Looked at the knock off ones for a few hundred….but am wary.

Reply:
$350 Chinese knockoff with CANDI and the mods referenced by the SAAB guys.

Specifically two very important fixes…
– I replaced the dodgy DC-DC converter with a quality Japanese or Korean unit. I’ve forgotten which country it came from.
– I also replaced the SOP MAXIM RS232 <–> TTL chip with the correct part. Some Asian units have the MAX202, like mine, instead of the MAX232. $0.32 from Mouser along with some other components to make a $25 order. Floated it off with a cheap hot air pencil and tweezers. Then soldered on the replacement. Most of the new ones actually have a real Maxim MAX232 now.

I bought my Tech 2 from these guys. Took me a minute to find it in my old Email folders. http://www.obdii365.com/wholesale/gm-tech2-gmtech-2-diagnostic-scan-tool.html 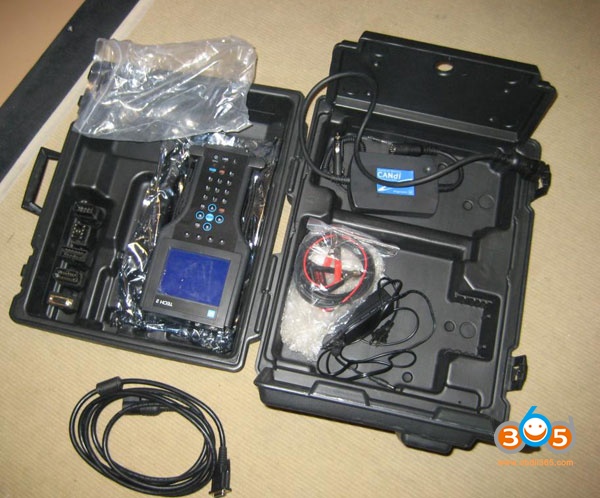 Get a couple Linear flash cards with it. I got the GM 33.004 and a couple others.
My spares ride in some old PCMCIA hard plastic travel shells and a Ziploc freezer bag to protect them. You can find inexpensive card cases on Evilbay by searching for “PCMCIA Card cases”. I also keep the cables and CAN-DI in Ziploc freezer bags.

My clone Tech II works just fine with my 05 Chevrolet Silverado. Keep in mind that the Tech 2 is 1990s technology with turn of the millennium hardware/software updates that only works up to MY 2013 or so depending on the vehicle. It’s a real nice tool that I’ve used on the later-GMT400, GMT800, GMT900, & W platforms.
After MY 2013 you’ll need a Bosch MDI and GM GDS on a laptop. You can run Tech2Win and GDS on a cheap used laptop using the MDI as the vehicle interface so…

You can burn the PCMCIA linear flash cards from a PC with a real RS232 Serial port in the Tech 2 but it’s slow as death and I wouldn’t try it with a USB to RS232 adapter.
I would highly recommend finding a cheap obsolete business class laptop with USB ports and PCMCIA/CARDBUS slot. The DELL D620 D620 D820 & D830 are in the $100 price range, came from Dell with Windows XP but will run Windows 7, and have real DB9 RS232 serial ports in addition to USB2 & CARDBUS slots. My ancient 14 year old beat to death HP NX7400 works quite well for burning cards as well but it doesn’t have available Windows 7 drivers from HP and has no RS232 port.
To quickly burn linear flash cards for the Tech 2 in a CARDBUS slot in your laptop You’ll need some obsolete software from the long gone Elan Systems company called Memory Card Explorer. You can’t buy MCE anymore. If you need a virus free copy PM me. The SAAB guys have a pretty good Tech 2 WIKI that includes MCE binary images of Tech 2 PCMCIA linear flash cards.

Question: I had one Tech2 clone and it worked great with my 04 Silverado. When I got my 07 classic it was bately functional as a code reader. I wouldn’t recommend it for your 07 Silverado.

Did you have a working CAN-DI interface box?
Mine is running the last flash image available from GM… 33.004 GM North American Operations. It works on my 2009 Impala, 2005 Silverado T800, and 2000 GMC C2500 T400. It should’ve worked on a 2007 T800 with a good CANDI box…
FYI: I’ve read that some mid 90’s GM vehicles need earlier card versions to access all functions. It seems that GM neutered the diagnostic functionality for the older vehicles in later releases.

If it’s a 2007 T900 you’re better off to get a good WiFi MDI clone or the more expensive real McCoy from Bosch without WiFi for around $700. Good clone WiFi MDI units work with laptops running the real GM software and internal firmware from AC Delco

Here’s a review of the good bad and ugly about a “good” MDI clone.