I am very happy with the capabilities of this Thinkdiag scanner. I used it on my 2019 Equinox to test the bidirectional testing and was able to control the console lights and a few other simple and low risk tests. It really is incredible to have that capability for such a low price. I would buy this again if I lost it or broke it.

Pros:
1. Price
2. I was able to see data that my cheaper scanner couldn’t do.
3. True bi-directional testing!
4. Downloading the app and setup was very easy.
5. Connecting to the device from my Samsung Note 8 was easy too.

Cons:
1. You get two Makes for free for one year then you have to subscribe. For example, I chose GM and that lets me scan my Equinox and Silverado. I read it will also work on the Pontiacs in my extended family but I have not tested that yet.
2. Speed – This thing is not as fast as the pro scanners I see on YouTube. This is not an issue for me but I am not doing this for a living.
3. Bluetooth Losing Connection – When I first started using it the bluetooth connection dropped several times. After the first 4-5 attempts I had no further issues with it. I was sitting in the driver’s seat very close to the ODB port so I’m not sure what the issue was.

Really handy little tool. Use it on a 08 Mini Cooper, performed great bidirectional control, power balance, lights, solenoids, etc. Definitely worth it. I’ve used it with Ford and Toyota as well and its done everything I’ve required even on the powerstroke diesel.

I work at a dealership, so I mainly work on one car line. The cheapest bi-directional scan tool I’ve found is around $800-1,000 range with yearly subscription fees almost as must as the price of the tool. This tool is subscription based so, you pay for what you need. $39.95/year per car make. This is perfect for a backup scan tool if you work at a dealership, or a DIYer with only one or two makes. If you work at an independent shop, I would still consider it if you mainly work on 3 or 4 makes. Above that, a full function scan tool is probably a better choice. Scans all systems, bi-directional control, lots of data pids. Really impressed with this tool.

Cons: graphing is all on one screen. Not a huge deal.

very cool, rainer. I like the PDLS+ option. I may also try out Power Steering+.

I bit the bullet and ordered one of the Thinkdiag modules after watching a video review that showed a “coding/program” function in the app. We shall see whether it is the coding I want it to be. If it works, it’ll be a sub-$100 option for coding.

Sad to report that the ThinkDiag does not perform coding functions.

Kind of looks like Launch EasyDiag 3.0 with the X431 Pro Software…

1). Thinkdiag update: in the ThinkDiag APP.

Comes with one free software, If you need other car brand or special function software, you need pay for it extra. Each car brand software costs 50USD.

After one year, each software update cost is 29.95USD.

Please look at the following table. 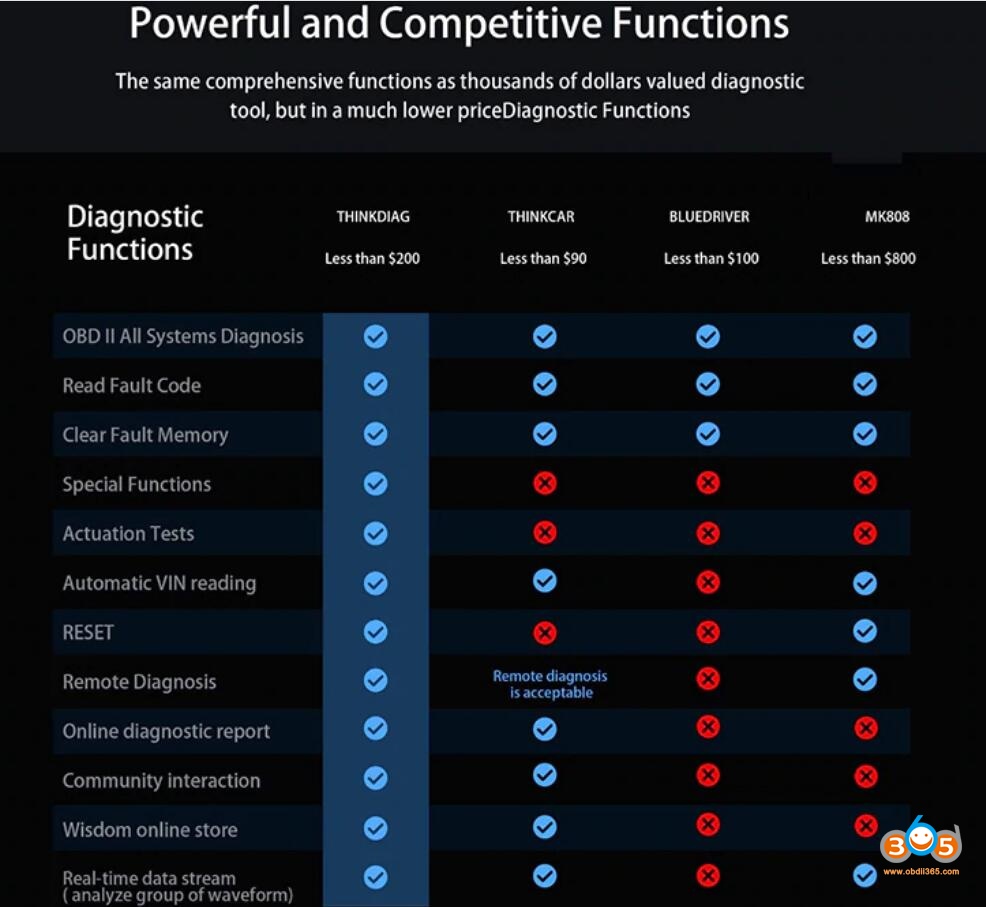