Question: What is the difference between the auto pro pad and the x100 pad 2 pro? Do they both do all the same functions?

Xtool AutoProPad is made for US market and requires updates but updates are free for first year. No Chrysler pin codes tho (except for fobik).

Xtool X100 Pad2 Pro is for other countries market and comes with 2 options. Basic or full for VW AUDI stuff too. No tech support but does all Nissans to current with ease. And not very good for older stuff old fords old Honda’s etc. also does GM no prob including prox and remotes. It’s a good device for the price.  No Chrysler pin codes except for fobik.

Is the autopropad the same as other xtool devices?

This is different than other XTool machines you may see on sale in other countries. The AutoProPAD is the only XTool machine made for locksmiths in the US market and includes extra OBD2 and EEPROM software specific to United States vehicles. The cheaper devices such as the PS80, PS90, X100PAD, or X100 have some of the same hardware but mainly performs only the advanced vehicle diagnostic functions that an auto shop might use. For instance, if you purchase a PS80 (instead of an AutoProPAD), you will not be able to program Nissans with 20-digit BCM, Ford Fusion without NASTF, Toyota G, Toyota H, Toyota Smart Keys, Chrysler 200 systems, most Chrysler PIN code reads, VW/Audi programming, Honda Prox, and many others.

The AutoProPad is currently available in three versions; the “Basic Version,” the “Lite-Version” and the “Full-Version.”  All three tools use the same basic machine and software.  The differences between the versions are the accessories and optional components that are included.

The LITE is more for OBD2 programming only and does not have the extra adapters needed for things like EEPROM (reflashing) and transponder chip pre-coding. It is lighter and more compact (7″ screen instead of 8″ screen) than it’s bigger brother, but both are the same speed, the same memory, and program the same vehicles. The only exception to that is that some vehicles (newer BMWs and VWs, specifically) require the pre-coding adapter, which is not provided with the AutoProPAD LITE. 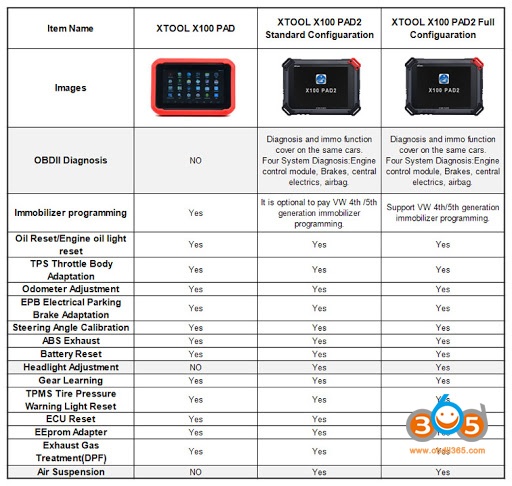