Here’s something good i found when i bled ABS for my 300M. Very useful…. Hope it works for you guys also.

Complaints i posted in https://300mclub.org/forums/:

I noticed something with my car that I wanted to comment on since “testing” my ABS for the first time this season. After arriving to school just in time for a final I put my foot down hard on the brake while pulling into the gravel lot, which was frozen over just like a skating rink. As I fully anticipated the ABS came on and was effective. However, once I came to a complete stop the pedal went soft and I had to pump it 6 or 7 times before it firmed back up (no jokes please). I have noticed my brake pedal is a little softer than most other LH cars I have driven but I have never noticed variance like this after ABS braking. I am very familiar with braking using ABS in my car and I think this is something abnormal.

Did the fluid level drop — if it did, then you probably got a leak somewhere and air in the system.

If the fluid level is OK but pedal is softer after ABS engagement, there is a possibility that a valve in the ABS system did not close fully.

In order to provide anti-lock capability, ABS unit has the ability to isolate any wheel from the M/C pressure as well as relieve the pressure into a temporary storage (accumulator). The ABS pump then pumps the excess fluid back into the M/C (hence pedal pulsing).

There is a possibility that the valve on one wheel has not completely closed and allows bleeding into the “accumulator”. As ABS system is not engaged, the pump will not start to empty the accumulator. So you are basically compressing the accumulator spring before any significant brake action on that circuit would commence. Accumulator has a rather small volume, so it would reach capacity pretty quickly. I noticed that there is a significant amount of rust that builds up in the brake fluid as the lines rust from inside due to moisture accumulation. May be a flake of rust got stuck in the valve and provides a miniscule leak into accumulator. ABS monitors state of the valves — anything significant would trigger an ABS fault.

It might be something else, like M/C leaking internally past pistons. But on the off chance, I would exercise ABS a few more times. Valve action would most likely cure the issue if it is the problem.

(AFAIK, on our cars ABS controls rear wheels independently rather than as a pair).

Playing with DRB III, you discover how potent ABS system is. When running ABS HCU test, it instructs you to apply pressure to the brake (with engine off/booster bled). Then ABS valves open up, filling up accumulators. It is very impressive — pedal falls to the floor without any resistance. As the next stage of the test, it closes the valves and turns on the pump, which literally pumps the pedal back to the original state. While I knew how ABS worked in general terms, I never realized the degree to which ABS could potentially interfere with normal brake system. No wonder, the unit is designed to be so fail safe, as to prevent such failures (turns itself off at the slightest sign of trouble).

Normally, there should be no need to bleed ABS, as long as MC was never run dry, you should be OK. I would be careful about sucking fluid out of MC — a little is OK, just make sure that neither half gets empty to prevent air injection. 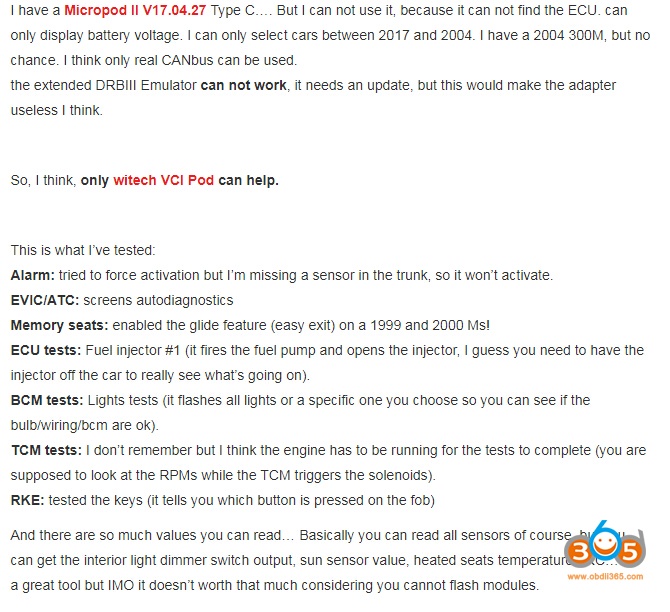